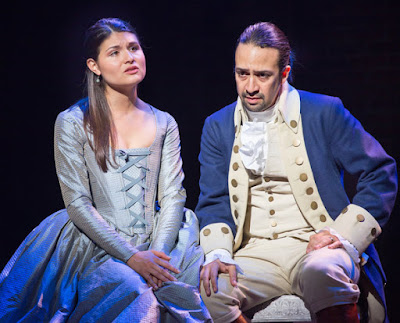 All good things must come to an end. The sun must set, the show must end and cast members of the Broadway sensation Hamilton must leave the program after nearly a year of constant performances. Lin-Manuel Miranda, the actor who plays the titular role of Hamilton and also created the book, music and lyrics for the show, was confirmed to be vacating the show a few days ago on July 9th, a not shocking development given his incredibly jam-packed schedule.

He'll be leaving the show on July 9th, which is when the contracts for many of the actors in the show are up. It looks like Miranda will not be the only actor leaving the program once their contracts are up, as The Hollywood Reporter has confirmed that Phillipa Soo, the actor who plays Eliza in the show, will also be going hooooooooooommme. The report also notes that Soo is eying a career in film and television, which sounds awesome to me. Can we get Soo in that Sandra Bullock led reboot/remake/spin-off/brand extension of Ocean's Eleven? Please?

I doubt Miranda and Soo will be the only actors leaving the show come July 9th. Will the likes of Leslie Odom Jr., Daveed Diggs or Renee Elise Goldsberry follow in the footsteps of their two lead actors or will they stick around? We've got a month to find out. For now, allow me to salute Soo, whose vocal performances on Burn, Helpless and Who Lives, Who Dies, Who Tells Your Story are among the best on a soundtrack that isn't short on such exceptional tunes. Can't wait to see what the future holds for you and Mr. Miranda. Something tells me you both will....blow us all away.