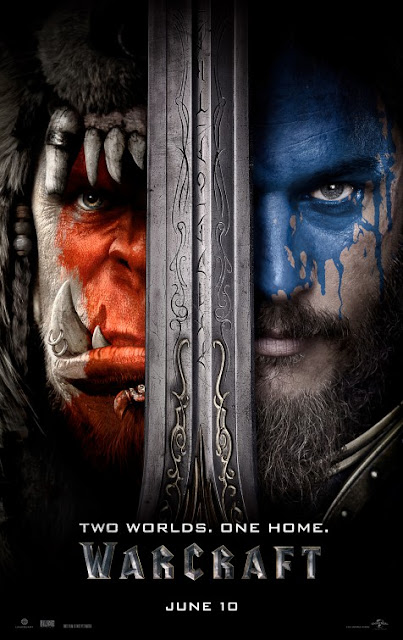 Now, the story of Duncan Jones 2016 motion picture Warcraft is a tad complex, so let's get the plot summary right out of the way, shall we? The world of the Orcs is dying and they need a new home. Their leader, Gul'Dan (Daniel Wu), uses green mist to extract energy from innocent people to power a portal to the human world where a large group of Orcs intend to gather enough human prisoners to power up the portal to a point where it can bring all of the other Orcs over. Among these Orcs is Durotan (Toby Kebbell), one of the few explicitly "good" Orcs and one of our lead characters of this movie who ends up having no impact on this narrative whatsoever.

Anduin (Travis Fimmell) intends to protect his kingdom and his people from the massive beasts who have taken over. He'll need the help of magicians Medivh (Ben Foster) and Khadgar (Ben Schnetzer) and a half-human(?)/half-Orc hybrid named Garona (an embarrassed-looking Paula Patton). They will all fight and do things to no real end character-wise. In the end, nothing is resolved, character arcs are left dangling like worms on a hook meant to lure fish and the whole story feels basically superfluous. Before we get to an abrupt climax meant to set up sequels that will never come arrives though, sit back and enjoy a cluster of indistinguishably boring characters and incredible visual effects being wasted on a simply turgid script.

First and foremost, let it not be said that Warcraft cut corners on its visual effects, which mostly (aside from so-so green-screen shots) look great. The Orcs are a particularly sterling accomplishment, especially in tight close-up shots of their face where one can really take in how the animators have captured the finer intricacies of this creature's appearance. Unfortunately, all of those effects are in service of an abysmal script by Duncan Jones and Charles Leavitt that's more than a little daunting in its cumbersome nature.

Y'know, it's very hard to care about conflict when both sides of said quarrel aren't really properly fleshed out or developed. For a movie that has war in its very title, you'd think the dueling humans and orcs would be given the necessary amount of depth to make their dissension properly engrossing. Alas, that simply isn't the case. The Orcs don't have their culture fleshed out at all and most of them register as only CGI cannon fodder. Also, they've made the weird decision to heavily distort the voices of all of the Orcs (save for Durotan's wife) to a lower register which is a very poor idea when wanting the audience to engage with a creature not based in reality. Think of all of the great CGI characters in cinematic history; Neytiri in Avatar, Rocket Raccoon in Guardians Of The Galaxy, even Gollum in Lord Of The Rings had a peculiar voice that could conceivably come from a human. Lending a noticeably human quality like a distinctly human voice into a very clearly non-human creation makes it easier to connect with your talking raccoons or blue cat aliens because there's something recognizably human to latch onto.

But here, all of the Orcs sounds like the Cave Of Wonders from Aladdin doing his best Optimus Prime impression. Even worse, the vocal distortion makes all the Orc's sound the same, so extended dialogue sequences between the creatures become grating to listen to. On the human side of the equation, Travis Fimmell (who I've heard gives a great performance on the TV show Vikings) is as bland as a pile of water chestnuts commanding a lead turn that has him conveying emotions like "mildly perturbed" upon hearing the news a nearby village has been burned to the ground by Orcs. Other noteworthy actors like Ben Foster, Dominic Cooper and Ruth Negga round out the supporting cast to spout out fantasy mumbo-jumbo, with Negga being the only one to truly register an interesting presence in her minimal amount of screentime.

Even the film's action, again, something that you'd think would have some level of craft in it considering the word "war" is in this summer blockbusters very title, lacks real imagination or wit. It's all just a bunch of slicing and dicing swordplay with no character work to accompany it. Warcraft is such a bummer of a movie, for a number of reasons. One such cause for it being such a morose experience is the bizarrely high level of casual violence (cages stuffed with innocent humans are frequently pushed off cliffs with their screams of pain and fear filling up one's ear) to no real thematic end. There's also the fact that anytime the film seems to be introducing a potential interesting concept (like the idea of Orc's and humans working together to stop Gul'Dan), it just drops said interesting concept and never mentions it again. And finally, it's a real bummer to see Duncan Jones, whose 2011 movie Source Code was so damn good, be the filmmaker behind such an incoherent mess of a film like this one.
Posted by Douglas Laman (NerdInTheBasement) at 9:03 AM