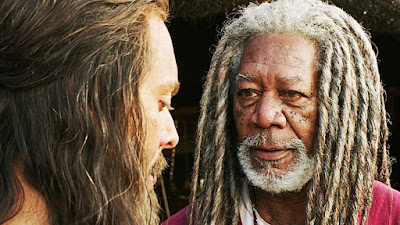 Cinema strictly revolving around Christian themes had existed for decades prior to 2014 (just ask the likes of Reverent Herbert Jump and the various directors who worked for World Wide Pictures), they became a big business in modern day Hollywood when God's Not Dead, Noah and Heaven Is For Real made big bucks in quick succession. As both a Christian and cinema devotee, I wish more of the movies made in the wake of such financial success to more cues from one of 2014's most underrated features, Noah, by sparing no expense on interesting characters, darker themes and glorious production values.


Instead, most have taken their inspiration from the cheaply produced wretched piece of filth that is God's Not Dead, a movie so depraved and cruel it would make Jesus Christ shudder that a movie that so blatantly contradicts his own teachings would be in any way associated with him. Since then, some of the Christian films to cash in on this financial resurgence have fared well at the box office (War Room became one of the biggest surprise sleeper hits of the summer) and not so well (God's Not Dead 2 performed poorly even by Christian movie standards, a nice bit of karma if I ever saw it). Future Christian movies heading our way include Sam Worthington and Octavia Spencer being held up in The Shack and the creators of God's Not Dead doing a movie about the Columbine shooting (God help us all). There's also a big-budget remake of Ben-Hur, whose newest trailer, which you can watch below, seems to be tailor made for Christian moviegoers.

While the first trailer tried to make this new Ben-Hur look like a quasi-300 knock-off, the heavy emphasis on Jesus Christ in the trailer makes it clear that Ben-Hur is readjusting its marketing so that it can primarily appeal to Christian moviegoers. That's not an entirely bad idea honestly; there's already plenty of summer blockbusters coming out this summer and this approach allows Ben-Hur to stand out from the crowded pack. Plus, the aforementioned War Room made big bank in a late August release date last year.

All that analysis having been said, how is the trailer itself? It's....kind of terrible honestly. Who knows if this is yet another good movie given a bad trailer but for now Ben-Hur looks super generic and bizarrely cheap. Sets & costumes look like they were borrowed from that The Bible miniseries and the only visually distinctive thing that stands out is Morgan Freeman's hairstyle. I did get a chuckle out of a  house just clomping around in the crowded stadium seats during an otherwise somber montage with a super-serious song playing in the background. That moment of unintentional humor aside, this new trailer for Ben-Hur is just a dull 150 seconds of footage that doesn't inspire a lot of confidence for the motion picture it's promoting.
Posted by Douglas Laman (NerdInTheBasement) at 10:07 AM