Teenage Mutant Ninja Turtles: Out Of The Shadows Review 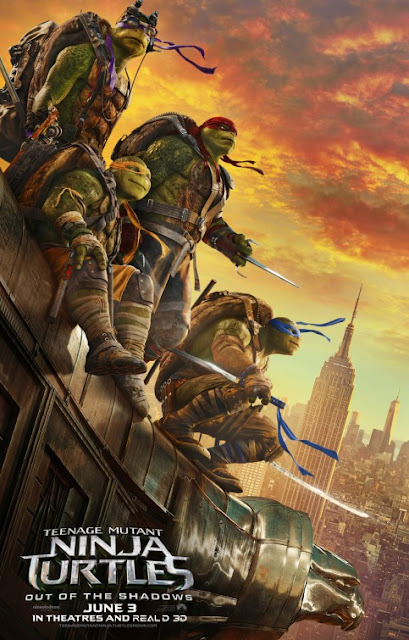 Two years ago, we were, I guess blessed, with the presence of a live-action/CGI adaptation of Teenage Mutant Ninja Turtles. It made a bunch of cash at the box office but it was a mess of a movie. It lacked any interesting characters or involving action scenes that might have saved its deplorable screenplay and its fair to say that its financial success was motivated more by nostalgia than actual adoration for the film itself. With all that money comes, of course, a sequel, Teenage Mutant Ninja Turtles: Out Of The Shadows.

Unlike its predecessor, this Ninja Turtles movie ditches any sense of "dourness" or "realism", though it still carries a script that's...well, let's just say it's a bit of a mess. Out Of The Shadows starts out with the Ninja Turtles attempting to intervene with some ninjas attempting to break Shredder (Brian Tee) out of prison. Shredder is a teleported away via a device created by scientist Baxter Stockman (Tyler Perry), but instead of landing at the extraction point, Shredder is teleported to another dimension(???) where he meets sadistic alien Krang (Brad Garrett) for the first time.

In the span of about a minute, Shredder and Krang form an alliance, the existence of aliens is introduced into this series and Krang gives Shredder a purple elixer to make super animal soldiers that Shredder can use to fight the Ninja Turtles. It all comes off even more convoluted in the scene in the film itself, trust me. From there the movie also shoehorns in staples of the Ninja Turtles franchise like warthog Bebop (Gary Anthony Mitchell) and rhinoceros Rocksteady (Sheamus), as well as masked vigilante Casey Jones (Stephen Amell, not once taking off his shirt for some reason). Then there's April O'Neil (Megan Fox) returning from the first movie and the Ninja Turtles having their own individuals squabbles to solve and oh my Lord that's a lot of stuff to stuff in one movie.

To be seriously fair, the movie comes off surprisingly less overstuffed in actual execution than that plot synopsis lets on. That's one of the advantages stemming from this features lighter tone, it's easier to accept the more bonkers elements of the plot when such elements inhabit a more stylized world. That's one positive aspect of the script for sure, but unfortunately, the screenplay comes up short with the four lead heroes. Orange mask wearing reptile Michaelangelo is particularly obnoxious, with his "comic relief" tendencies generating more groans than chuckles from me. Similarly, Raphael is a petulant chap so prone to anger it begins to feel less like he's the "rebel" of the group and more like he might have some actual psychological issues to work out. Maybe that'll be the premise of the third movie.

So yeah, the bulk of the character and dialogue (poor Stephen Amell is saddled with some truly terrible lines) work is bunk. But weirdly enough, the film is actually pretty enjoyable in its action scenes, which, under the direction of director Dave Green, are competently shot, lit, paced and mapped out. Like I said earlier, this is a movie that tosses away the shackles of adhering to "grimness" and the scene where the Turtles just go to town on their foes is the apex of this methodology. It lacks even the barest character work vital to bringing it beyond just "serviceable", but there's no denying there are some fun moments in here. In fact, there's enough of them to render the features nearly two-hour running time surprisingly endurable, there's shockingly very little "dead time" to be found here in terms of pacing, though any .

Teenage Mutant Ninja Turtles: Out Of The Shadows is basically one big toy commercial, but I found myself succumbing to its brand of gonzo silliness more often than not even if the movie works better as individual scenes than it does as a whole feature film wherein the bonkers nature of the plot begin to get repetitive. Hell, there might have been something really fun here if the scripts numerous egregious flaws (namely in how insufferable the Turtles are for most of the movie and how Megan Fox still doesn't really excel as an actor) weren't so blatant and frequently hindering the better aspects of the production. While Out Of The Shadows never gets above being just OK, that's miles better than its predecessor and at least it delivers a couple of instances of off-the-wall nuttiness (like Tyler Perry's performance that makes Jim Carrey's turn in Batman Forever look subtle) that had me smiling.
Posted by Douglas Laman (NerdInTheBasement) at 8:03 PM

Email ThisBlogThis!Share to TwitterShare to FacebookShare to Pinterest
Labels: June 2016, Movie Review, Teenage Mutant Ninja Turtles: Out Of The Shadows