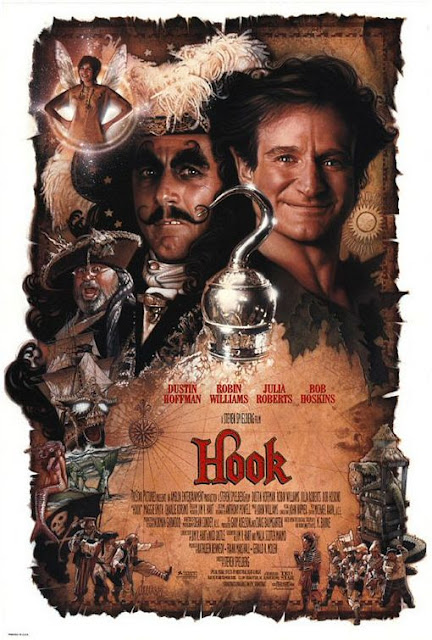 You can practically see the head of TriStar waxing poetic on how much of a slam dunk Hook is conceptually. "It's got two of the biggest actors on the planet, one of the most well-known fictitious characters of all-time and it's directed by Steven Spielberg! How could this not be a runaway hit?" For sure, Hook made a pretty penny in its initial theatrical release (its $119.6 million cume back in 1991 would be about $246.1 million in 2016 dollars), but its critical reception was some of the most negative ever experienced by Spielberg and it's since faded from the public consensus. Today, 90's kids, from my experience with this age group, are more likely to have fond memories of fellow high-seas set family movie Muppet Treasure Island than they are of the first time Robin Williams and Steven Spielberg joined forces.

The less than stellar reputation of Hook is kind of famous among film geeks at this point and I'm afraid, after watching this title for the first time, I must agree with the consensus. Hook failed to work its magic on me or make me believe in fairies. Hook centers itself on the world of Peter Pan, though it is not a Maleficent-esque tale centered on bad guy Captain Hook as the misleading title implies. Instead, Peter Pan (Robin Williams) has grown up to be a lawyer who works so hard that he has no time for his kids. Yeah, this o'l 90's kids movie plot point gets dragged up again. While on a trip to London, Peter's two kids, Jack (Charlie Korsmo) and Maggie (Amber Scott), are abducted by the nefarious Captain Hook (Dustin Hoffman), who wishes to challenge Peter Pan to a great war to end all wars.

Tinker Bell (Julia Roberts) manages to coerce Hook to give her and The Lost Boys three days to get Peter back into his old self before he can face off against Hook and get his kids back. One extra wrinkle here; Peter doesn't remember his years spent in Neverland, so he doesn't have the ability to fly. He'll have to reconnect with his imagination if he wants to get his offspring back from the clutches of Hook and his pirates. It's a pretty basic premise that's made extra convoluted by Peter's amnesia, which honestly comes across as solely a way to pad out the running time rather than a way to flesh out Peter in an interesting way.

Hook's depiction of Neverland is surprisingly lacking in whimsy or fun, with The Lost Boys camp, an environment that should be the epitome of childhood wonder and joy, is amusingly stuck in the 1990's with its skateboard ramps and graffiti on the wall. As for other fantastical elements, mermaids make only a passing appearance while Tinker Bell is just around to be basically a glowy cheerleader for Peter Pan, though at least she has one scene (wherein she grows to normal human size) that has Tinker Bell expressing her desire to kiss Peter Pan that stretches the film briefly into the terrain of straight-up weirdness that's at least entertaining to watch.

Alas, that brief moment is the exception to the otherwise dull proceedings and not the rule. Perhaps where Hook comes up most short is in its primary character arc of Peter learning to appreciate his children again. Or, child, should I say, since Maggie (despite getting a lot of screentime in the pre-Neverland parts of the movie) basically vanishes after she fails to fall for Hook's trick of making the kids think of him as a father figure instead of their actual father. Once it's apparent she won't cooperate with Hook's plan, the villainous pirates sends her away and the film solely focuses on Peter's attempts to reconnect his son. Peter trying to regain the trust of Jack alone is poorly handled from a structural standpoint, but him declaring at the end of the story how much he's learned in regards to loving both of his children comes off as baffling instead of heartwarming considering he didn't really do anything to regain the trust of his other child. The central theme of Peter appreciating his children more is severely undercut by Maggie's bizarre absence and thus anything that's supposed to be emotional about Peter becoming a "redeemed" if you will falters greatly.

And then there is Robin Williams and Dustin Hoffman, the two lead actors whose fame at the dawn of the 1990's was considerable, though each actor was noteworthy for different reasons (Hoffman had nearly three decades of award-winning work under his belt while Williams was coming off back-to-back box office successes Good Morning, Vietnam and Dead Poets Society). Both are extremely talented individuals who share the trait of being completely lost in this movie. Williams portrays a more restrained character than in his other family movie work, but any sort of inventiveness Williams could bring to either the mundane or fantastical parts of Peter Pan feels stunted. For the grown-up lawyer side of the character, Williams feels like he's being directed to portray a one-note stereotype of "busy but well-meaning father", while it feels like his take on Peter Pan is the same o'l thing we've all seen before. Peter Pan flies, makes a crowing noise, all that stuff. Robin Williams gift in these kind of roles is bringing elements to the table you could never imagine but here he's trying so hard to fit into the archetypical vision of Peter Pan he has no room to soar with his own take on the character.

Dustin Hoffman is even more lost as Captain Hook, not quite delivering the go-for-broke nastiness the part calls for. He seems to be channeling a refined cocky presence in his performance but it comes across in execution as simply Hoffman sleep-walking through the part of playing this antagonistic figure. Both Williams and Hoffman seem more restrained than innovative in their performances and the same goes for director Steven Spielberg. Aside from a handful of solid shot compositions, there's really not much here to differentiate his work from other 90's family movie director mainstays, namely Home Alone helmer Chris Columbus. Most damning of all towards this motion picture is that I can easily say that even fellow 1990's Steven Spielberg misfire The Lost World: Jurassic Park had more personality on its bones than the hopelessly generic and forgettable Hook.
Posted by Douglas Laman (NerdInTheBasement) at 3:38 PM