The Fundamentals Of Caring Review 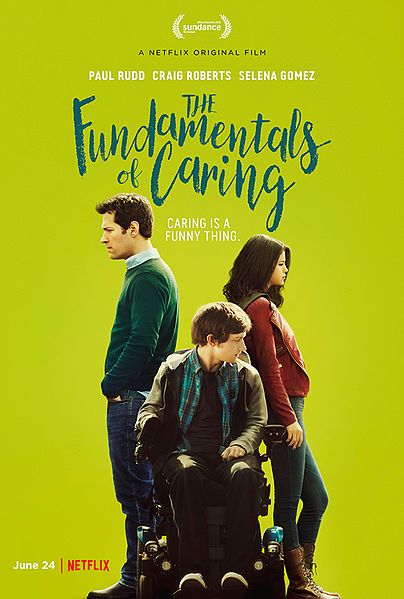 Ben (Paul Rudd) could really use some cash. In an effort to get some financial stability in his life, Ben decides to take a six-week course to become a guardian for someone with physical disabilities. The individual he gets paired up with turns out to be Trevor (Craig Roberts), a foul-mouthed British 20 year-old with muscular dystrophy. Trevor has a strict adherence to his routine, which entirely entails him staying in his living room sans a brief weekly trip to the park on Thursdays. In an effort to get him out of his comfort zone and see the greater world, Ben decides to take Trevor to see various tourist attractions (all revolving around the concept of being "The World's Biggest", i.e. The World's Biggest Cow) that the dude is obsessed with.

This may sound shocking, but their time on the road to visit these landmarks soon has them engaging in some witty banter, running into some colorful characters including a runaway girl named Dot (Selena Gomez) and maybe, just maybe, both Trevor and Ben will learn a thing or two along the way! Yeah, to be perfectly frank, this is not the most innovative movie in terms of plot structure. You can see what plot points, character arcs and even what pieces of dialogue early on in the film will get called back to towards the end of the movie coming a mile away. Some familiarity in a movie's narrative isn't inherently a bad thing if it's presented in a way that's entertaining and/or makes sense for the characters, but the going-through-the-motions nature of The Fundamentals Of Caring's script is easily one of its greatest hindrances.

Another notable narrative hiccup in Rob Burnett's screenplay is how Ben and Trevor's initial days working together for the first time are breezed by in a montage. "Brevity is the soul of wit" as they say, but c'mon, they could have spared an extra scene or two to more efficiently establish the relationship between this duo. As it stands in the movie, we zoom right past them getting to know each other and into the more lofty dramatic material (like Trevor's distant relationship with his father and Ben's own personal grievances) that can't quite pack the punch it should have due to this central character dynamic having not been properly established.

It should also be noted that the dialogue from Trevor swerves between sometimes being quite humorous and also sometimes coming off a bit too desperately as a script trying to force an idiosyncratic speech pattern onto Trevor. There are quite a few of his lines that just don't feel natural and instead come off as ways to concoct offbeat quotes that could fit right onto a T-Shirt or other pieces of merchandise. There seems to be an attempt to replicate the same sense of distinctiveness found in Diablo Cody's teenage dialogue in Juno from nearly a decade ago (wow, does time fly or what?) but some the swear-laden phrases that come out of Trevor's mouth lack the authenticity and solid delivery that made the various colloquialisms found in the likes of young peopled centered indies movies such as the aforementioned Juno famous.

Across the board, the acting in The Fundamentals Of Caring is solid, especially in Paul Rudd's leading turn. He's playing a more emotionally damaged figure than he did in past projects like I Love You, Man, but the naturalistic charms of Rudd are actually his greatest asset in conveying his sincerity for wanting this job and making his own personal problems more acceptable. Craig Roberts is let down by some dialogue, but I'd say he's overall fine as Trevor while Selena Gomez turns in decent work as a curse word spewing romantic interest that Trevor pines for. A shame poor Emma Thompson, whose plays Trevor's mother, gets next to nothing to do.

There are certainly charms to be found within The Fundamentals Of Caring, namely in lead actor Paul Rudd and the overall easygoing atmosphere the film presents. But that paint-by-the-numbers script serves as such a major hindrance to so many different aspects of the movie (namely in properly establishing the dynamic between Ben and Trevor as well as the dialogue) that keeps the movie from realizing its true potential. This is nowhere near a bad movie, but there's also a great distance between this and projects that fully utilize the talents of The Fundamentals Of Caring's strong cast.
Posted by Douglas Laman (NerdInTheBasement) at 9:07 AM