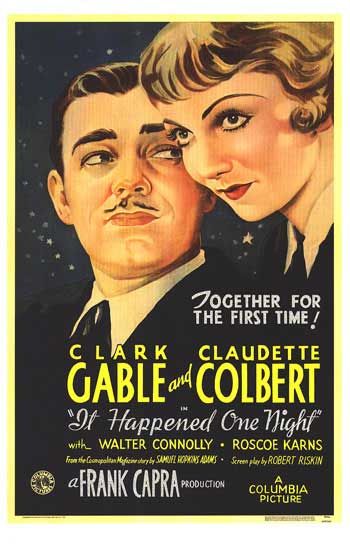 Frank Capra spent 35 years directing feature films for Hollywood, accumulating a resume brimming with noteworthy titles today well up by film historians as some of the best motion pictures ever made. Hell, It's A Wonderful Life alone would give Capra a pass even if the rest of his filmography solely consisted of him directing direct-to-video Land Before Time sequels. But like I said, there's plenty of other significant projects that the fellow helmed back in the day, one of those features being the subject of this review, the 1934 romantic-comedy It Happened One Night.

It Happened One Night gets considerable mileage of the classic clash of classes, with its plot revolving around the dynamic between wealthy lady Ellie (Claudette Colbert) and the far more financially strapped writer Peter (Clark Gable). Ellie is attempting to keep a low-profile as she's run away from her father and is determined to establish her own independence now that she's finally free from the presence of her bodyguards. Of course, the real world tends to be a harsh place and Peter, who just happens to be another occupant on the bus Ellie is traveling on, attempts to help her out, much to dismay.

As the pressure from her concerned father heats up though, Ellie will have to accept his assistance if she wants to survive out here. From there, the juxtaposing backgrounds of the two lead characters play out to comedic results, with Ellie having very little experience with various facets of conventional middle-class life such as public bathhouses. Meanwhile, Peter's confident demeanor occasionally gets upended to humorous effect, such as his efforts to hitchhike not going quite as well he'd hope.

The screenplay by Robert Risken is filled with plenty of thoughtfully crafted sequences like that that merge characterizations, humor and a pinch of potentially blooming romance with sizable prosperity. The strong screenplay is given a further boost by the chemistry of Clark Gable and Claudette Colbert. For Colbert, she does a wonderful job conveying her characters yearn for independence after a life of constant control while Gable exudes a sense of "all-knowing" confidence, even if it sometimes becomes humorously apparent that his characters personality in certain situations may be made up more out of unwarranted bravado than actual skill or experience.

It's also interesting to note that the movies being released in 1934 places it in the middle of The Great Depression, adding an extra layer to the resentment that the less financially well-off Peter has towards the far more affluent Ellie. There's a lot going on under the surface of It Happened One Night, but even on the most surface-level qualities, it still works super well as a humorous lark that makes great use of some of the most talented actors and director of its time. Chalk this one up as another big win for Mr. Frank Capra!
Posted by Douglas Laman (NerdInTheBasement) at 10:21 AM