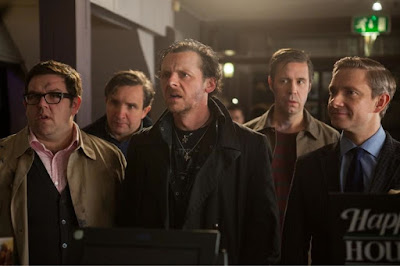 I love movie trailers. They can function as a way to get excited about a film you already know about, as a means to entice you into seeing something you previously had no knowledge about or even serve as singular works of art in their own right. But not every movie trailer can be a winner, even if they're promoting motion pictures of top caliber quality. Inspired by The AV Club's examination of what makes a good trailer, today I'll be examining five movie trailers that I find to be subpar, a sharp contrast to the excellent films they're supposed to be raising awareness for.

The Avengers
All of the fun and character work that made The Avengers such a gem won't be found here, which is more average than notably inferior for much of its running time. Then that wretched Nine Inch Nails song kicks in and the overly obvious lyrics (the bands vocalist intoning "WE'RE IN THIS TOGETHER NOW" lends the trailer all the subtlety of one of The Hulk's punches) just drag the whole thing down. It's also apparently suffering from a problem that the Ant-Man teaser would have years down the road, where the majority of the visual effects weren't done when the first teaser came out.
The World's End
Edgar Wright's work is so contingent on pacing and precise editing that the idea of whittling any of his works down to a conventional two-and-a-half minute long trailer sounds like the very definition of lunacy. While the intriguing plot still seeps through (and I do appreciate the marketers opening the trailer with an extended comedic conversation revolving around The Three Musketeers, signifying the kind of humor that the final film would carry), the trailer puts all of the sci-fi action at the forefront of things, and without greater context to surround all of that fighting, it just comes across as a mish-mash of noise.
Edge of Tomorrow
Prior to Edge of Tomorrow coming out, no one expected it to be as good as it was. and the main reason for that was the promotional material for the film. Stuff like this trailer just made the film look like Oblivion 2.0, without depicting the unique personality of Tom Cruise's lead character or showing off just how bad-ass Emily Blunt could be. You don't have to spoil the whole movie in these trailers (the contrary is preferable to me personally) but a great trailer should at least work as an entertaining piece of work on its own merits. Even when promoting an incredible film like Edge of Tomorrow, this trailer just failed to raise to the challenge.
Tangled
After The Princess And The Frog only did so-so at the domestic box office, Disney decided to look at why the film didn't perform better. Instead of surmising that releasing the film only two weeks prior to a new Alvin & The Chipmunks film might not have been the best idea in history, the main takeaway was that boys refused to see a movie with the word princess in the title. The then forthcoming feature Rapunzel was renamed Tangled and the marketing scheme for the film eschewed highlighting the female protagonist and music and instead focused on male bandit Flynn Rider. While Rapunzel manages to get three words out of her mouth in this trailer, it's almost comical how the trailer avoids to give her dialogue or even a physical presence (notice the awkward cut 44 seconds into the trailer that ensures Rapunzel and her frying pan are hidden from the audience).
Hugo
It's fairly apparent that Paramount Pictures had no clue what to do with Martin Scorsese's 2011 film Hugo. The directors first family film, which is a beautiful journey into the human soul and the power of films, got this trailer that feels scientifically designed to be the quintessential generic family movie trailer. Easy-going pop song just well-known enough to appeal to adults but not too edgy enough to make watchdog parents uneasy? Check! Slapstick? Check! Why, there's even a shot where a dog reacts to something embarrassing! There's so much wonder to be found in Hugo, but the only wonder this trailer left me was the persistent thought in my head that had me wondering who thought this would be a good way to sell such a distinctive motion picture.

Posted by Douglas Laman (NerdInTheBasement) at 11:44 AM