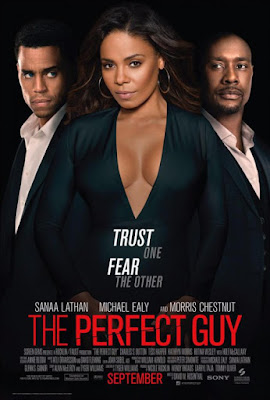 Complacency is a primary driving factor for The Perfect Guy, moreso than the urge to create thrills or a suspenseful atmosphere. It muddles through its plot in a rigid manner that never allows for twists, surprises or any sort of uncertainty. Instead, every single aspect of the plot flies by in a by-the-numbers method that fails to be out-and-out deficient, but also stumbles at creating a thoroughly absorbing slice of edge-of-your-seat cinema.

The crux of The Perfect Guy's plot rests upon the relationship between Leah (Sanaa Lathan) and
Dave (Morris Chestnut), whose romantic partnership comes to a conclusion when Dave's reluctance to have children spurs Leah, who wants to start a family, to look for love elsewhere. These two get very little screentime to sell themselves as either a functional or a flawed couple that their breakup (which occurs mere minutes into the feature) elicited no response from me. I will say, though, that it did strike me as the most contrived plot point, as no human being that was dating Morris Chestnut would leave that guy. Have you seen how charming he is?? What the hell are you thinking Leah??

Anywho, Leah soon finds herself ensnared in a relationship with Carter (Michael Ealy), a man who oozies kindness and charm. Pretty soon, Leah is convinced she's found...the perfect guy. Their time spent as on dates and growing as a couple is another element of the film that suffers from being undercooked. I never got a sense of why they would actually function well as a romantic duo, they don't seem to share interests (Leah gets very little depth as a character beyond her generic office job and owning a cat), she just seems to fall for him because he gave her an iced latte one time.  Rushing through developing the bond between these two character, as well as the kinship between Leah and Dave, comes across as the movie trying to get to the thrills and chills as soon as humanely possible.

But by bypassing opportunities for character growth, the film only diminishes the potency of the more tension filled sequences later on in the film. After all, these individuals caught in suspenseful circumstances haven't been fleshed out in an in-depth manner, so why should I care about whether or not they survive? At least the darker part of the story, which revolves around the hidden and far more sinister actual personality of Cater (he isn't so perfect after all!), is interesting to watch mainly because Ealy (who comes off as wooden in the earlier idyllic dating sequences) seems to relish playing such an overtly antagonistic character.  That kind of passion he has for playing this character translates into scenes of him committing nefarious and creepy deeds being some of the best of the film, simply because they actually have a spark of distinctiveness to them.

Of course, just because something is unique doesn't automatically make it good.  Case in point; the editing of The Perfect Guy, coming courtesy of Joan Sobel. Shots come and go in this motion picture in the blink of an eye, cutting between different characters in such a rapid manner as to leave me absolutely discombobulated. I don't know what on Earth possessed Sobel and other individuals involved in this movies filmmaking process to think this was acceptable in any respect, because my God, it's almost impossible to concentrate on what's going on on-screen when it feels like the film has been edited in a frantic way to make it watchable solely for hyperactive cheetahs hopped up on Red Bell.

The Perfect Guy is one of those kind of movies where I really can't dismiss it entirely thanks to virtues like Michael Ealy as an amusing "love-to-hate-him" over-the-top villain. Plus, props to the movie for the dark and desperate turn its plot takes in its final scenes. But, good God, it's saddled with such an abysmal script and some befuddling editing that are flaws so huge in scope that they make the more positive qualities of the undertaking feel more like anomalies than anything else. Even in it's better moments, The Perfect Guy is, in the end, not the flawless movie.

Oh, wait, sorry, it's not the exemplary movie. That's a much better pun.
Posted by Douglas Laman (NerdInTheBasement) at 8:29 PM