The First Trailer For The New Jungle Book Movie Has Arrived! 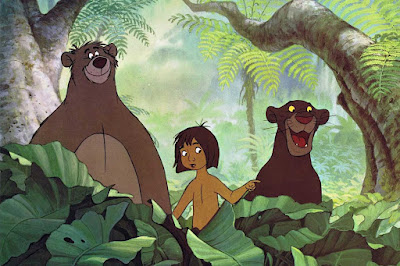 The Jungle Book is one of my favorite films of all-time, full stop. It's a magnificent showcase for the incredible hand-drawn animation Disney was capable of in its heyday (every one of the minor mannerisms of Shere Kahn are amazing and even subtle moment like Kaa shrugging shows an immensely inventive spirit), as well as some insanely lovable characters like Baloo and Bagheera. The best part? This isn't all bad on childhood nostalgia; rewatching it last year, I discovered that not only did the motion picture hold up, but there were more subtle elements of it that stood out to me as an adult viewer that only enhanced my enormous appreciation for this 1967 film.

Given its popularity with the general populace at large (as well as how Rudyard Kuplings book on which it is based is still fairly well-known), it's not exactly shocking that Disney is making The Jungle Book the next animated classic from the studios library to receive a live-action remake, following Alice In Wonderland, Maleficent (which was more of a prequel/sequel/terrible movie) and Cinderella, courtesy of director Jon Favreau. The first trailer for this remake just dropped and you can watch it below!
Hmmm...this is an interesting teaser, mainly because there's simultaneously not a lot on display in terms of the length of footage, but there is quite a bit to chew on. First off, the grey aesthetic of those first few moments of the trailer had me petrified, as it made me worried that we were getting the "grim n' gritty" Jungle Book, just as we had gotten that murky looking approach to Wonderland in Tum Burtons take on that Disney film.

Thankfully, brightness and color is brought up later on, as are appearances by Shere Khan, Baloo and Bagheera, This appears to be the first movie I've seen that looks to be emulating the visual style of the two most recent Planet of The Apes movies, i.e. they're making all the CGI animals look as realistic and having these creatures bounce off of live-action humans and settings. This means Baloo is no longer a blakc bear, but a more gruff looking brown bear, though the brief glimpse of The Bare Neccesities makes it look like the movie will retain his personality. This approach also means the face of King Louie looks just like the face of Christopher Walken, which is a choice that I can't quite decide is creepy or interesting yet.

Overall, I'm intrigued by certain aspects of the production, especially given how excellent Favreaus films like Elf and Iron Man are (the less said about misfires like Cowboys & Aliens and Iron Man 2 the better). Like I said, we don't get enough footage from this trailer to truly understand every aspect of the film, but there is enough here to at least pique my curiosity. I can also attest from this footage that Scarlett Johansson looks to be making a very interesting version of Kaa, whose gigantic size in this trailer took me completely by surprise.
Posted by Douglas Laman (NerdInTheBasement) at 11:18 AM