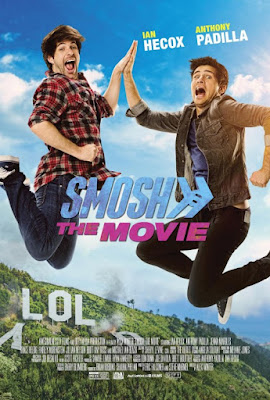 In this day and age, comedians/performers/singers on YouTube are finally breaking over into the pop culture mainstream. Figures on the website like Tyler Oakley have gotten book deals, James Corden and Jimmy Kimmel have featured YouTube celebrities on their late-night programs and now low-budget feature films are being made centered on certain YouTube stars. That final development is what brings us this motion picture entitled Smosh: The Movie, focusing on a comedy duo (comprising of Ian Hecox and Anthony Padilla) named Smosh. What does the name mean? Like whatever Bill Murray whispered into Scarlett Johansson's ear at the end of Lost In Translation, it remains a mystery.


Anywho, this duo has found large-scale success on YouTube doing weekly comedy sketches, which propelled them to being the most subscribed channel on YouTube multiple times. Cultivating their brand seems to be the driving force behind this movie, which goes for a hackneyed plot delivered in a way that redefines unimaginative. Hecox and Padilla play themselves in this "plot", which deals with Padilla wanting to delete an embarrassing YouTube video featuring him in his Senior Year of High School engaging in a backflip with embarrassing consequences. Feeling the viral video will jeopardize his chances of reuniting with his High School sweetheart that he still has feelings for, Anthony drags Ian on a journey through YouTube itself to eliminate the pesky video.

Traveling through YouTube means this duo will have to go through various viral videos in order to achieve their goal of erasing the video. This sounds like a premise that could be ripe for comedy, but very little is done with the concept despite the possibilities at the features fingertips. This might not be an issue if the film actually delivered on laughs, but there's shockingly little in the way of memorable gags in this films short running time. The only line that really generated a chuckle from me was Anthony's High School sweetheart mentioning how the only three people who watch her YouTube videos are her "Mom, Dad...Uncle Keith's ghost".

That's seriously it in the way of jokes to be found in Smosh: The Movie, with numerous scenes in the film registering as unintentionally creepy rather than humorous. Basically, any female character in this movie (that isn't YouTube comedian Jenna Marbles, playing herself in a brief cameo) is treated as an object, which leads to an unsettling scene where, for reasons too complicated to get into here, Anthony finds himself with 30 "girlfriends", who all wear only skimpy bikini outfits. Similarly, Ian's romantic interest is only given the name ButtMassageGirl until the films penultimate line of dialogue.

There is one thing I find interesting about its two stars, which is that, whereas a number of other YouTube stars find fame via doing VLOG's, these two have been doing short comedy sketches for almost a decade now. Basically, they have experience playing other characters other than themselves, so in theory, that should mean they actually do OK in terms of acting in the context of a feature film, right? Yeeeeeeaaaahhhhh no, no they don't. These guys have a way of delivering their lines that makes it seem like every single thing they say is a set-up for a joke, rendering any attempt to have these two deliver dialogue meant to have carry emotion a fool's errand.

Maybe they'd be good actors under the direction of someone like Paul Thomas Anderson, but here, they're so lacking in distinctiveness as to make Jai Courtney in Terminator: Genisys look like Chris Pratt in Guardians of The Galaxy. Lacking in actual humor, cohesive plot (attempts to change that embarrassing video soon result in time travel shenanigans, which, to quote Hermes from Futurama, just raises further questions) or acting, you should treat Smosh: The Movie like a number of YouTube ads and skip it.
Posted by Douglas Laman (NerdInTheBasement) at 10:24 AM