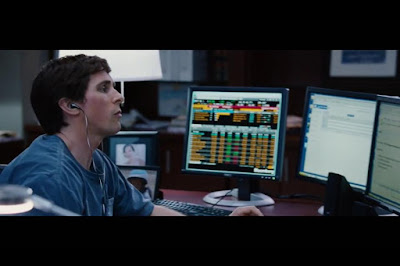 Paramount just added another motion picture to a crowded Christmas Day release schedule today by announcing that Adam McKay's The Big Short will be released on December 11 in limited release and on December 23 in wide release. It's no shocker for weirdos like myself who obsess over movie release dates, considering Paramount is always doing these sort of last minute announcements regarding the crucial Christmastime frame (who else remembers their public indecisiveness over whether to release The Wolf Of Wall Street or Jack Ryan: Shadow Recruit over Christmas 2013 two years back?), and to commemorate the films new release date, the studio has released a trailer for the drama that you can watch below!

I'm intrigued. Frankly, I think this movies plot, dealing with the intricacies of Wall Street and the stock market, is a bit too dense to cohesively put into a two-and-a-half minute trailer, but damn if this trailer still didn't catch my interest. I'm particularly intrigued by Christian Bale in this film, considering (A) he's one of my favorite actors, and (B) he's got the talent to turn his character, who just from the trailer looks like the kind of fellow who could potentially be reduced to nothing more than a bland stereotype, into something nuanced and special.

Speaking of actors, holy hell, this cast. Brad Pitt, Ryan Gosling and Steve Carell also star here, plus there are supporting turns from Melissa Leo and Karen Gillan, which is quite a crop of talent to land for one feature. Plus, Adam McKay has a great track record for me, particularly with The Other Guys (which also dealt with the slimy underbelly of the stock market), which I'll go up to bat for being one of my favorite comedies of all-time. Super cool to see The Big Short getting released this year and also awesome to see it get such a promising, Led Zeppelin tracked trailer.
Posted by Douglas Laman (NerdInTheBasement) at 11:25 AM