You Want Trailers? We Got Trailers! Check Out The New Trailers For New Films From, Among Other Directors, Steven Spielberg, Ron Howard And Danny Boyle 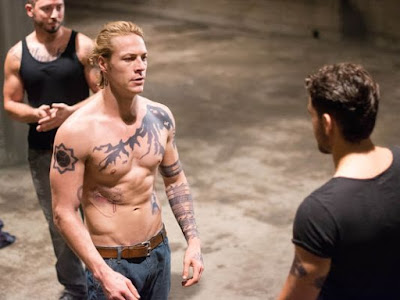 There's tons and tons of new movies coming out over the next few months, a welcome reprieve from the past few weeks where new cinematic offerings were slim pickings. Four of the new movies coming out over the next three months, as well as one feature set for release in the Spring, have released new trailers, so I've decided to condense all of them into one post. Below, you can see the trailers for five forthcoming major features as well as my brief thoughts on them.

Let's start out with...
Bridge of Spies
Steven Spielberg has made one or two good movies in his time as a director, so Bridge of Spies was a motion picture I was mildly curious about. All joking aside, this trailer, while slightly short failing to clock in at one minute and 45 seconds, does a solid job of showing why this one has my interest. The plot is intriguing, the always reliable (except for Larry Crowne) Tom Hanks is around and even a potentially cheesy speech at the end about the character played by Hanks comes across in the trailer as engaging.
Steve Jobs
Considering my experience with Aaron Sorkin's writing is limited to a handful of The West Wing episodes and The Social Network, and doesn't include the controversial HBO program The Newsroom, I'm psyched to see Steve Jobs, which continues its excellent marketing with this great trailer that manages to give a look at the movies varying aspect ratios as well as further glimpses at the members of its ensemble cast like Kate Winslet, Jeff Daniels and Seth Rogen. i'Mready for this one, that's for sure.
In The Heart Of The Sea
I've actually had my anticipation for this one legitimately tempered by the fact that it got a PG-13 rating, which means the darker aspects of the story might get neutered. But that caveat aside, this is a great trailer filled with intensity, a foreboding tone and some interestingly eerie Brendan Gleeson narration. And good heavens, is the color scheme in this movie gorgeous or what? Those conventionally soothing colors clashing with the terrifying activity going on on-screen is the kind of visual element I hope that In The Heart Of The Sea carries over from this trailer to the movie itself.
Allegiant
Oh boy. Another one of these Divergent films. Greeeeeaatt. Man, I had such high hopes for where Robert Schwentke after his delightful debut film Red, but then R.I.P.D. happened and now he seems to be stuck in Divergent sequel hell. It looks like in this one Shailene Woodley will find time in this post-apocalyptic environment to get her hair done, Miles Teller will wonder why he can't end up in any good blockbuster movies and Harry Dunn will walk down a staircase. It also looks like the characters get attacked by flying rumbas at one point.
Point Break
I like how this trailer positions the fact that Edgar Ramiriez and his team are breaking the law as a good thing because they're "...honoring the laws of nature." Oh, so it's about enlightenment, got it! That excuses them being criminals, got it! This trailer isn't bad, there's no blatantly bad editing or anything like that, but if there was a prize for "Most Generic Action Movie Trailer", this would get it. Hopefully Ray Winstone gets more to do in the movie itself, as he's the only part of Point Break I'm currently anticipating.
Posted by Douglas Laman (NerdInTheBasement) at 2:45 PM

Email ThisBlogThis!Share to TwitterShare to FacebookShare to Pinterest
Labels: Allegiant, Bridge of Spies, In The Heart Of The Sea, Movie Trailers, Point Break, Steve Jobs