While the likes of PIXAR and Illumination Entertainment flourish, Sony Pictures Animation is a North American animation studio in search of that one gigantic hit that'll put them on the map, something like Frozen, Toy Story, Shrek, Despicable Me or even Ice Age that can signal to the world that they've arrived. Unfortunately, in their nine years of releasing feature films, there's only been sporadic box office success to greet the studio and only one of the companies works have entered the pop culture zeitgeist in a meaningful way.

Started up in 2001 and 2002 as an offshoot of Sony Pictures Imageworks (a visual effects company), the company was produced in response to the success of then recent American animated features like Shrek, Monsters Inc. and Toy Story 2. Similar to how all sorts of animation studios were started up in the 90's after The Lion King spun cartoon lions into gold,  Sony Pictures Animation was but one of a number of attempts by the major studios to cash in on the goldmine of computer animation, and they'd have to really stand out with their output if they were to thrive in the soon-to-be crowded marketplace.

The studios first feature arrived on September 29, 2006, the eleventh computed animated family film to arrive that year. While PIXAR had another hit with Cars, and Blue Sky Studios and DreamWorks Animation made cash with their efforts (they released Ice Age: The Meltdown and Over The Hedge that year respectively), the past nine months were also littered with high-profile box office bombs like The Ant Bully, The Wild and Doogal. Which kind of box office performance would Open Season fall into? As it turned out,  it belong to neither classification. This $85 million production garnered the then fifth biggest September opening weekend of all-time, $23 million, and held on well enough in a family-film free October to gross $85 million domestically.

That number was a far cry from all of PIXAR's release (it was barely more than half the domestic cume of that studios lowest-grossing effort, A Bug's Life), and also off from all of DreamWorks Animations CGI efforts. It didn't help that the film itself was derivative as hell, relying too much on bathroom humor (onscreen defecation and vomiting both occur within Open Seasons running time) and having its plot points feel they were directly lifted from the likes of Shrek. At least the animation was decent, building off the squash-and-stretch style of the previous years Madagascar that managed to wring successful laughs out of a number of visual gags.

Their follow-up feature carried over that derivative spirit of Open Season, with their Summer 2007 effort Surf's Up being a part of that mid-2000's obsession with penguins spurred by March of The Penguins and Madagascar. This film did at least carry one unique aspect with it, which was the fact that motion picture is presented as a documentary. It's a nice touch, leading to some fun jokes and allowing for the characters to discuss their backstories and personal struggles via interviews, though this method of filming seems to mostly vanish from the film in its last 30 minutes. It's not enough to make Surf's Up a masterpiece (there's still too much bathroom humor and its supporting cast feels extraneous), but it at least showed that the artists at Sony Pictures Animation could do something distinctive when they put their mind to it.

After a two year hiatus, the studio came roaring back with their only true blue in-house creative success, Cloudy With A Chance Of Meatballs. Taking a children's book and spinning memorable humor and effective pathos out of it, directors Phil Lord and Chris Miller would go on to become some of the most successful comedic directors of this day and age after this feature, and for good reason. They finally brought that mixture of successful hilarity and emotion that had eluded the previous two movies Sony Pictures Animation created. Audiences and critics alike adored the end result, making it the first movie from the animation house to gross over $100 million domestically.

After another two year gap, Sony Pictures Animation returned in 2011 with a bang, releasing two motion pictures in the same year for the very first time. The duo of movies couldn't have been more different; the first to be released was a live-action/CGI adaptation of The Smurfs, the other an Aardman Animation effort called Arthur Christmas. Smurfs managed to rise above the level of Alvin And The Chipmunks by actually having objectives (Stop dastardly wizard Gargamel, get some sort of magical staff) to move the plot forward, but it's still a forgettable mess of a movie. This became an even bigger success for SPA, surprising all by grossing a strong $142 million domestically and grossing an additional $421 million overseas. Holy Smurf! 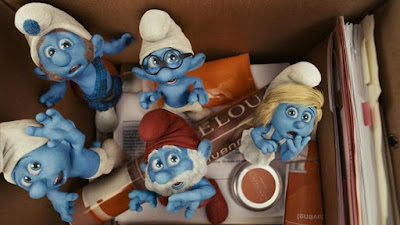 Arthur Christmas was far more modest at the box office, but it was the real winner far and away in terms of quality. Written by the folks at Aardman and animated by SPA, Arthur Christmas took the legendary Santa Clause mythos and wrung humanity and poignancy from them, a seemingly simple concept that pays off dividends in the film itself. Not only is it a heartwarming creation, but it's also funny as hell, especially whenever Bill Nighy as GrandSanta pops up on-screen.

2012 also brought two movies from the studio, and just like 2011, one was a feature from Aardman and one was created in-house at SPA. This time around, the movie from Aardman, The Pirates! Band of Misfits, got released first, and what an absolute hoot this movie is. The lovely stop-motion animation compliments a script chock full of gags both broad and subtle. Plus, the voice work, featuring actors like Hugh Grant and Martin Freeman, is a major reason why those jokes are executed so effortlessly well.

The Pirates! failed to light the box office on fire, but the second film from SPA that year gave them another rip-roaring box office success in the form of Hotel Transylvania, a film that combined Sony/Columbia mainstay Adam Sandler with that studios animation department. The long in-development feature had some funky animation, but was a cluttered mess with some stilted voice acting (Andy Samberg is a funny dude, but his voice work as Johnny in this movie is painful to experience). Like I said, this one made a mint at the box office, which is why you can look forward to a sequel come this Friday.

Speaking of sequels, a duo of those were released by SPA in 2013, the first of which was The Smurfs 2, the only feature from the studio I haven't seen. Surprisingly, this one didn't replicate the success of its predecessor, its domestic box office cume being almost exactly half of what the first film made in America two years prior. Even overseas dollars couldn't save this misfire, sending the Smurfs franchise on the road to a 2017 all-animated reboot.

Coming out two months later, Cloudy With A Chance Of Meatballs 2 fared better financially (though it still grossed less than its predecessor domestically), though the lack of the original films director Phil Lord and Chris Miller meant the film lacked the zip of the first movie. With no emotional arc to ground the absurdity, Cloudy 2 just soon devolves into an overlong stretch of food puns, albeit one that has some solid voice work from the likes of Bill Hader, Anna Faris, Terry Crews and Will Forte playing a nerdy bad guy.

This Friday, the studio releases its tenth feature, Hotel Transylvania 2, the third sequel in a row for the company. After that, SPA has officially scheduled a Goosebumps movie for this October, then a Smurfs reboot called Get Smurfy for March 2017 as well as an untitled movie for September of that year and an animated Spider-Man movie for Summer 2018. They also have a faith-based movie called The Lamb set for December 2017 that looks to capitalize on the success fellow Sony/Columbia owned movie studio TriStar has had with Christian movies like Heaven Is For Real and War Room.

Hopefully, in future projects like those described above (as well as in development features like Medusa, a live-action/CGI ALF film and an Emoji movie), the filmmakers at Sony Pictures Animation swing for the fences like the best of their movies have done. Because, really, for the most part, the output at this studio has been derivative more often than not. Maybe they should hook up with Aardman again?
Posted by Douglas Laman (NerdInTheBasement) at 5:56 PM