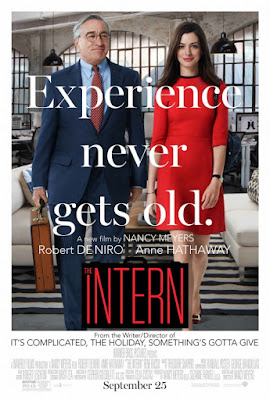 To say me and The Intern got off on the wrong foot is a gross understatement. For the first few minutes of this movie, I was pretty much certain I would despite this feature, mainly because the only thing the film was serving up in these early scenes were vapid jokes about the age disparity between the titular intern, Ben, played by Robert De Niro, and his far, far younger co-workers. The moment Ben told his 20-something interviewer he used to work for a phone book printing company, I knew just what the tired as hell punchline was and please Lord, get me out of this movie.

Thankfully, there's more in The Intern than those awkward early scenes indicate. There's a sharp lack of substance or depth in any situation that the films story (which literally just revolves around the friendship between the worldly Ben and his go-go boss Jules, played by Anne Hathaway), but I did appreciate how, once the concept of Ben working in a youth-filled workspace is established, there's no contrived antagonism to speak of. The younger employees working with Ben don't crack wise about "prunes" or what not, he's accepted as just another fellow in the office, and there is something nice about that kind of easy going energy.


It helps that De Niro and Hathaway are actually great actors who give the script (which is written by the movies director Nancy Myers) an ebullience pneuma. Hathaway particularly does a great job of giving Jules, an individual who could have easily become solely a sack of quirks (she rides a bike around the office, for instance), some humanity and an irresistible personality driven by spunk and determination. Similarly, De Niro provides plenty of moments of levity in the film, plus, he's got solid chemistry with his co-workers played by the likes of Adam DeVine and Zack Pearlman.

While the good acting and mellow atmosphere are charming to experience, the two hour plus running time began to wear on me, mainly because, like I said, there's just not enough profundity or particularly notable laughs to be found. If The Intern wanted to be an insightful movie with few comedic beats or vice versa, or even both, that'd be totally fine. An easygoing vibe can only carry your movie so far, and even a talented roster of actors can't make up for a script whose structural design can only be described as sloppy.

The audience I saw The Intern with ate this bad boy up, and truth be told, I can see why it would appeal to general audiences. Many moviegoers simply see film as a recreational activity, and I suppose The Intern works if you just want two hours of breezy entertainment with some solid acting. As for me though, I live and breathe the art of cinema, and while The Intern never comes close to bad (hell, De Niro and Hathaway keep it from even being mediocre), it is a flawed movie that could have been so much more if it had actually tried to do....well, anything really.
Posted by Douglas Laman (NerdInTheBasement) at 1:12 PM