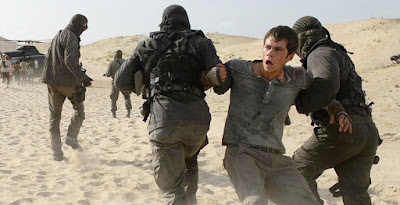 Summer may be over, but the sizzling heat of the Scorch was all audiences wanted this weekend, as Maze Runner: The Scorch Trials grossed $30.3 million over the weekend, a 6% dip from the opening weekend of the first movie, but still a decent sum, even if this one's price tag (a $61 million budget versus the first ones $34 million budget) means it won't be anywhere near as profitable as its predecessor. It's also unlikely to hold as well, due to forthcoming movies like The Martian providing much harsher competition for Thomas and his post-apocalyptic chums.


I'm not gonna be shocked if this one misses $100 million domestically, though that third and final chapter (which is already scheduled for a February 2017 release) will almost certainly still happen since international grosses for this entry in the trilogy are bound to be plentiful. Why didn't this new Scorch Trials improve drastically on its predecessor domestically? Blame the fact that the first movie was far from beloved and that the marketing for this new chapter lacked new concrete enemies or obstacles to up the stakes.

In second place, Black Mass grossed $23.4 million, a 2% dip from the opening weekend of The Town, which feels like a perfect movie to compare Black Mass to considering both of these movies are features from Warner Bros. released in mid-September dealing with Boston gangsters. Considering Black Mass centered solely on a real life psychopathic criminal exacting all sorts of horrible crimes, it's kind of surprising this movie got this high at the box office. Attribute that to the fact that seeing Johnny Depp in a darker role held a lot of allure after films like Mortdecai and The Lone Ranger.

Last weekends new releases came in at third and fourth place this weekend. In third was The Visit, which grossed $11.3 million over the weekend, a 55% dip that's a bit better than the average dip for these sort of horror movies. It's now grossed $42.4 million through 10 days, meaning it has now surpassed the lifetime gross of Lady In The Water and has a good shot of making more cash domestically than M. Night Shaymalans previous movie, After Earth, which grossed $60.5 million. The Perfect Guy came in at fourth place, grossing another $9.6 million over the weekend for a current total of $41.4 million.

For the first time since Mission: Impossible- Ghost Protocol, a new movie decided to open in
IMAX locations prior to going into a traditional wide release. That film was Everest, opening in 545 theaters (which is comprised by both IMAX and Premium Large Screen formats) to an impressive $7.6 million, by far the biggest limited release debut of the year. It's hard for me to figure out how this one will do in wide release (it's an extremely dark motion picture, which could hurt it), but there's no two ways about it; this is a most impressive launch for the title.

In sixth place was War Room, the little movie that could, easing a minuscule 15% over the weekend for a $6.5 million gross. This Christian motion picture has now grossed $49.4 million and will now have no problem outgrossing God's Not Dead's $60 million haul. Who would have thought that, out of August 2015's releases, that new $120 million budgeted Fantastic Four movie would make less than a little faith based movie from the makers of that one movie where Kirk Cameron beat up a computer?

Kate Mara is not having a good year at the box office. Hopefully The Martian will reverse that. Following that Fantastic Four debacle, her newest movie, Captive, which involves Rick Warrens The Purpose Driven Life as a plot point, opened in 806 theaters to a dismal $1.5 million opening weekend. In terms of faith based features, that puts it below the opening weekend of The Identical for Christs sake. This opening weekend is almost as disgusting as Rick Warrens views of the LGBTQA community.

Pawn Sacrifice debuted in 33 theaters this weekend to a solid haul of $206,879. Not an Earth-shattering number, but a decent sum that provides an OK foundation for the films wide release expansion this coming Friday. Also in limited release was Sicario, which wound up with an astonishing $381,000 over the weekend in only 6 theaters for a $64,000 per theater average. That's the biggest per-theater average of 2015, and serves as a great start for the movies theatrical release. Even more impressive is how the films distributor, Lionsgate, doesn't have a lot of experience handling limited releases of this sort. so to see this one go the extra mile financially is uber amazing.

The Top 12 over the weekend grossed $99 million, an 8% increase over the same weekend last year when the first Maze Runner was king.
Posted by Douglas Laman (NerdInTheBasement) at 10:58 AM