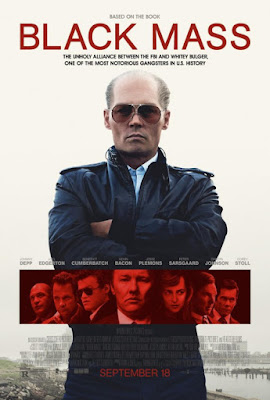 Johnny Depp has always had a knack for making the outsiders accessible, for twisting the unconventional into the lovable. While his unorthodox protagonist shtick became tired by the time his racially discomforting turn as Tonto came around, characters like Jack Sparrow and Rango were entities that provided immense amounts of humor and enjoyment. What's really surprising in his turn as Whitey Bulger in Black Mass is how much it rails against those sort of characters Depp has played in the past; Bulger is idiosyncratic, no question, but he ain't lovable. He's not even a tragic character who becomes heinous during the story like Sweeney Todd.

No, Bulger is a psychopathic, unsettling monster, one that the film holds no punches in depicting as the reprehensible creature he really was. His level of odiousness makes the idea of him being an ally to the FBI sound like pure insanity, but it's one that agent John Connolly wants to put into motion. His plan? Bulger gives the organization valuable information on some of the most formidable crime figures in Boston, creating the most unlikely alliance in history, especially since, while he's acting as an informant for the FBI, Bulger is not only still an active criminal, he's growing exponentially in his power as a crime lord.

His ascension in power is told via various figures in his criminal empire being interrogated by the FBI, which reminded me of the structure of a documentary to me. This way of telling the story is certainly a unique one, but it also feels like a missed opportunity, as the interrogation framing device feels extraneous to the plot as a whole. Putting the plot in this context doesn't affect how the story is told or help shed light on any of the people being interrogated, the latter foible particularly befalling Kevin Weeks, played by Jesse Plemons, who has the entire opening sequence of the film centered on him and his relationship with Bulger before he bizarrely vanishes from most of the rest of the story. I'd be shocked if he had more than half a dozen lines of dialogue for the remainder of the motion picture.

Luckily, the central figure of the plot, Whitey Bulger, is terrifyingly well realized, his menace omnipresent in every frame he pops up on-screen. Depp lends a petrifying presence to the film, making his turn here more than live up to the more-than-justified hype he's generated. A violent scene in a parking lot with Bulger is easily the highlight of the entire movie, thanks to how understated Depp is when carrying out his insane viciousness. It doesn't hurt that director Scott Cooper aces executing the fear in a visual sense that's controlling the entire scene.

Like I said earlier, the supporting cast gets underdeveloped, but that doesn't mean Depp is the only actor to shine here. Joel Edgerton as FBI agent John Connolly, who has a personal bond to Whitey, is excellent, as is a small turn by Dakota Johnson, who more than holds her own against Depp as Lindsey Cyr, the spouse of Whitey Bulger. I also gotta give props to the production design by Stefania Cella, which manages to find subtle ways to reflect the various decades that the plot goes through without ever coming across as distracting.

There are certainly flaws to be found in Black Mass that keep it from being as great as Coopers past two directorial efforts, but damn if this still isn't a tension soaked ride while it lasts. Plus, seeing Depp subvert the sort of performances that lent him his fame in the first place is a treat both as an exercise in examining his career as a whole and as just a slice of great acting.
Posted by Douglas Laman (NerdInTheBasement) at 10:29 AM