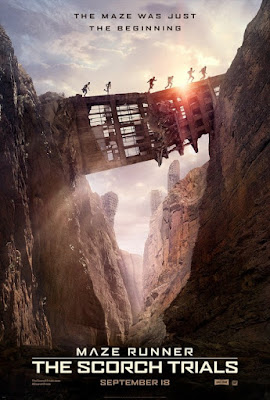 Even after watching both of these Maze Runner movies, I still have no idea who the main character of both features, Thomas (Dylan O'Brien), is. Is he a cunning fellow? Is he smart? Is he funny? Charismatic? Cocky? There's nothing here in terms of concrete personality traits, he just lumbers around and leads his ragtag group of 20-something comrades across various generic adventures. There's very little in the way of him connecting on an emotional level to his "friends", and while the very first scene of The Scorch Trials attempts to establish a "tragic" backstory to Thomas (he's separated from his mother as a kid), it never figures back into the films story.

Ah yes, the story. After The Maze Runner, which involved people running through mazes, The Scorch Trails involves Thomas taking his pals like Minho (Ki Hong Lee) and Newt (Thomas Brodie-Sangster) out of the hands of the evil corporation WICKED. The scientists and other employees that work for this organization think they're the good guys in this scenario, despite them being the ones harvesting people for their blood and working for a company called WICKED. Once Thomas and friends escapes the clutches of WICKED, they enter The Scorch, a post-apocalyptic wasteland so dull it made me hope against odds that Furiosa or WALL-E would show up to liven things up.

Out in The Scorch, Thomas must survive a variety of different scenarios (zombies, blistering heat, an Alan Tudyk run nightclub) that feel like they've all come from different films and just so happened to get smashed into the sequel to The Maze Runner. None of them figure into the overall plot structure (the zombies are a major presence for a stretch of the story, but then just vanish), and only that Alan Tudyk run nightclub yields some brief entertainment, if only because Tudyk cranks up the hamminess to eleven.

I've been pretty down on this movie so far, and for good reason, but I do wanna give some props to director Wes Ball, whose already growing as a filmmaker from the first movie in noticeable ways. He eschews shaky-cam and allows for grand, sweeping shots that allow the sand covered wasteland of The Scorch to be fully seen by the viewer. Similarly, in the realm of visuals, there a few zombies (which, sadly, continue the recent cinematic tradition of having zombies be speedy creatures) that have some neat designs. These zombies have acclimated to the environment they inhabit, so their bodies are populated by elements of their habitat. One form of the movies zombies, for instance, has grass growing out of his head and stuff like that is a welcome contrast to the more generic story and characters that overwhelm the rest of the motion picture.

Remember how I said Thomas was a bland protagonist? Yeah. he's not alone, as the rest of the supporting cast is almost entirely devoid of any notable personality traits to speak of. The majority of the individuals (especially the "outcast" of the group, Aris, played by Jacob Lofland, who played one of the two lead kid characters of Mud) in this movie honestly just seem to exist to overcome storytelling hurdles, as a means to get out of precarious situations without screenwriter T.S. Nowlin actually having to come up with solutions that are actually interesting or entertaining. To put it simply, much of the supporting cast work as walking talking deus ex machinas, basically.

Ah, but there is one character who really livens up the movie, that being Jorge, played by Giancarlo Esposito. He's actually got interests, a distinct personality and a father/daughter relationship with a woman named Brenda (Rosa Salazar). What's this? Actual character connections? Some level of gravitas? Why couldn't this movie center around this fellow? If only Maze Runner: The Scorch Trials actually put forth a soupcon of effort when it came to establishing its cast of characters or creating a tight script (seriously, this film goes on forever, it's at least 20 minutes too long), because, man, there are some stellar aspects of this production, like Jorge and the directing. But alas, audiences looking for quality in mostly any other part of The Scorch Trials are just going to get burned.
Posted by Douglas Laman (NerdInTheBasement) at 6:37 PM