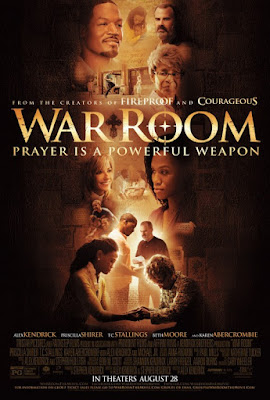 Let's start off this review with something legitimately positive; Alex Kendrick and his production company can take serious pride in getting a movie with a non-white lead made before far more high profile studios like PIXAR or Marvel Studios. That's impressive to see, especially given how many Christian movies relegate non-white characters to being side characters/stereotypes at best. Unfortunately, a diverse cast is pretty much the most positive aspect of War Room I can bring up, as the rest of the feature isn't so much bad (especially on the order of 2014s abysmal God's Not Dead) as it is just plain o'l forgettable.

Elizabeth (Priscilla C. Shirer) is going through a rough patch with her husband, Tony (T.C. Stallings), as his more distant attitude creates constant confrontations in the household, much to the detriment of both Elizabeth and her daughter, Danielle (Alena Pitts). A friendship that Elizabeth makes with Miss Clara (Karen Abercrombie) soon leads her to realizing the value of creating a War Room in her house, a War Room being a place where she can have time to spend with God and pray to him about her turmoils.

Now, that's an interesting concept for a movie, one that could show how the likes of scripture and prayer can be crucial factors in impacting ones life. Unfortunately, the way spending time with God changes Elizabeth's life is by having her come to the epiphany that she needs to be a more passive player in her marriage, essentially turning her into a 1950's version of "the perfect wife". She soon finds solace in making her husband dinner and not bothering him with so many darn questions, removing all traces of her more aggressive and take-charge attitude from earlier in the film.
Why not have her experiences with expanding the role religion plays in her life result in her being able to stand up to her husband? Sounds like more fulfilling material for a character arc to me, but the script from Alex and Stephen Kendrick has no interest in exploring such storytelling terrain.

Meanwhile, the husband in this tale is a further hindrance on the story, as his harsh personality at the start of the movie feels too overt to be credible and the fact that his actions later on in the plot (like check his wifes phone without her permission) go unnoticed by both the film and its characters. Yes, it's as uncomfortable to watch as it sounds. At least War Room looks, from a production standpoint, better than some of its Christian movie brethren, A $3 million budget allows for the film to look mostly professional in execution. The only memorable indication of this being a cheaper production comes in the form of a UPS stand-in called Deliver Your Stuff, complete with a generic white van with the companies fake-looking logo stickered onto a corner of the vehicle. But that's more of an anomaly in the feature, which carries camerawork which won't be mistaken for the work of Roger Deakins anytime soon, but hey, it doesn't distract from what's going on on-screen, so that's something.

If only some of the budget had gone towards getting the movies excruciating humorous moments fixed, as all the jokes in War Room feel cribbed from a bad parody of hackneyed sitcoms. Do you think the idea of Miss Clara looking at Elizabeths fancy-schmancy smartphone and then lamenting her more old-fashioned telephone as simply "...a dumbphone" as the idea of exquisite comedy? No? Didn't think so. That's pretty much the apex of quality as far as gags go, and it doesn't help that comical scenes go on far too long, as if the editor didn't want to deprive the audience of even a second of these "gems" of humor.

When I pray to God tonight, I'll thank him for helping me through my everyday trials and tribulations, I'll ask him to give me strength and wisdom in tackling my college assignments, and finally, I'll ask of him if there's any chance he could help future Christian movie filmmakers avoid the numerous flaws that sink War Room. Couldn't hurt to ask, right?
Posted by Douglas Laman (NerdInTheBasement) at 12:47 PM