Welcome To Me Review 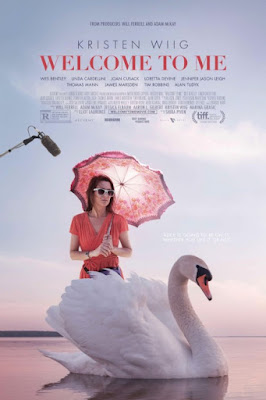 Ideally, the career path for Saturday Night Live cast members once they leave that TV show is to become a major comedic movie star, which is just what the likes of Adam Sandler, Bill Murray, Will Ferrell and Eddie Murphy managed to do. Other have gone onto more unorthodox projects, which is what Kristen Wiig has chosen to do as an actor now that she no longer has be a part of Saturday Night Live. After starring in the 2011 hit Bridesmaid, Wiig has opted for more low-key dramatic opportunities, and considering the top-caliber work she's delivered in the likes of The Skeleton Twins and The Diary Of A Teenage Girl, it was a smart move for both her and moviegoers everywhere.


One of her most recent forays into more dramatic material (though with a prevalent comedic undertone) is the summer 2015 offering Welcome To Me, where Wiig plays Alice Klieg, a woman with borderline personality disorder who wins 86 million dollars from the local lottery. She soon plans to spend her winnings on creating her own talk show, entitled Welcome To Me, which, to put it lightly, is unlike any other talk show program you've ever seen.

As I mentioned a moment ago, Welcome To Me has plenty of opportunities for humor to seep into the plot, which the game ensemble cast (James Marsden, Wes Bentley, Thomas Mann and Joan Cusack are all supporting actors here) is more than up for. But the best part about the film, to me, was how Wiig approaches Alice not as a caricature ripe for gags, but rather as a human being with real pain and real sorrow to work out. She does a commendable job lending gravitas to Alice at every turn, and considering how rare it is to see female cinematic protagonists with mental disorders, it's great that this character is treated with notable nuance.

As Alice's television program increases it's presence, I appreciated the doses of realism injected into what could have been a conventional "a-star-is-born" narrative. Her shows ratings peak, for instance, comes in the form of her program narrowly beating out a rerun of The Fresh Prince Of Bel-Air in terms of viewer, and that's the sort of low-key approach to Alice's story that keeps one foot of the tale stuck in our world. Actually, it does a good enough job of crafting a more realistic world for its characters to inhabit that the more pedestrian, I suppose, climax of the story feels like it doesn't quite belong.

Oh, it's not bad, not by any stretch of the imagination, but it's all so tidy that I was constantly expecting it to get subverted and for some dark plot turn to rear its head. But nope, it all goes through the motions in its ending, which is a shame, because the rest of the proceedings do do an admirable job of telling the story of Alice Klieg in a more pragmatic fashion. Director Shira Piven and writer Eliot Laurence deserve some major kudos for bringing Welcome To Me down that kind of storytelling path, which allows for its unique plot and characters to truly thrive and connect with audiences.
Posted by Douglas Laman (NerdInTheBasement) at 9:42 AM