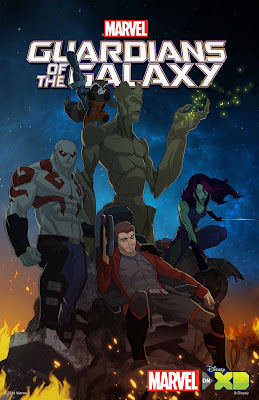 For the majority of comics brought to the big screen, there are a number of previous incarnations of characters like Spider-Man, Batman or the X-Men in the form of traditional comic books as well as television and even past film adaptations. These can provide inspiration on how to properly or improperly treat the character, as well as lend audiences a preconception of the characters they're about to watch in this new movie. For the Guardians of The Galaxy, though the term had existed in the Marvel universe since 1967, the team roster consisting of Star-Lord and Groot has only existed for seven years. Compared to the likes of Captain America, Superman or even Spawn, these Guardians were nobodies in the pop culture landscape.

That's no longer true of course given the massive success of the group's first live-action film last year. That motion picture being the only non-comic book adaptation of these characters (aside from Rocket Raccoon appearing in Ultimate Marvel vs. Capcom 3 and a handful of TV appearances, with the oldest of those appearances occurring in May 2012) means this new animated program starring the Guardians Of The Galaxy leans heavily on the 2014 film in terms of visual aesthetic and the personalities of the characters. I mean, really, what else do they have to go on in the pantheon of non-comic inspiration for these characters?

Their comic book roots are brought into the show in order to differentiate it from its cinematic kin (as James Gunn has made very clear, this new TV program has no relation to his series of movies or the Marvel Cinematic Universe), with Star-Lord explicitly being told he has Spartax heritage in this series premiere and the character Cosmo retaining his telepathic abilities from the comics. If they should have borrowed anything from the Guardians movie though, I'd say they should have taken more of a note on how well it depicted the group as a functional dynamic. You got why these guys would work well as a unit in both the action scenes and smaller, more intimate moments.

Here, there's surprisingly little done to establish the individual personalities of the various members of this group, which registered as a surprise to me personally  given that the majority of series premieres attempt to establish what makes each character and setting unique and worth watching. Star-Lord gets the most attention in this episode in terms of storytelling, while Rocket and Groot serve as sources of comedy and action. That leaves poor Drax and Gamora on the sidelines without much to do, though at least Drax establishes his own personal vendetta against Thanos. Poor Gamora is just stuck swinging her sword around and reacting to what other characters are doing.

The likes of Ricky & Morty have demonstrated just how great of a venue animation is for sci-fi, especially when it comes to depicting unusual or interesting alien designs. I was pleased to see, given the lackluster animation of fellow animated Marvel shows like Avengers Assemble, that there is some memorable design work to be found here, particularly when some antagonistic space leeches come around and in passing background alien characters. When it comes to the five leads, their design work is functional, though their movements, particularly Star-Lord, felt stilted to me.

It's pretty much a universally accepted truth at this point that reviewing the first episode of a TV show is a tricky predicament, since all shows grow after the trial & error that comes with their first few episodes. There's certainly potential for interesting stories to be told within Marvel's cosmic realm, especially when told in the medium of animation, but Guardians Of The Galaxy is far far from realizing that potential right now. I'd suggest just watching that great Guardians Of The Galaxy movie again instead of giving this average episode a view.
Posted by Douglas Laman (NerdInTheBasement) at 1:32 PM