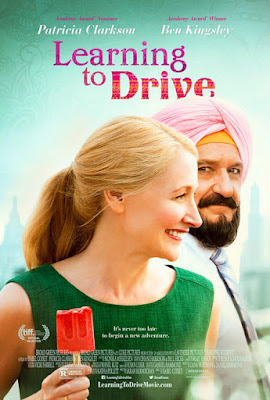 One of the most important lessons that Wendy (Patricia Clarkson) learns from her driving instructor Darwan (Ben Kingsley) is that, in order to do your best driving, one must clear their mind. She cannot be distracted by her recent divorce from long-time husband Ted (Jake Weber) and the numerous fall out effects from that event. That's easier said than done of course, but Darwan has plenty of patience when it comes to being a teacher, so Wendy may just get her license after all when all is said and done.


Does that sound like a relatively simple plot? It most certainly is, but it's hard to deny the charms of Learning To Drive, even if it's sorely lacking in depth. But there is something to be said for a diverting adventure that allows two types of characters (a middle-aged woman and a man from India) who typically don't get the chance to star in conventional American films. What a pity that is, considering how well Clarkson and Kingsley do in terms of having a warm dynamic as a duo and in their own individual plotlines.

Wendy's main emotional arc in the film, aside from the obvious journey of learning how to drive, is coming to terms with her divorce, which has upended her entire world. Clarkson does well in depicting the characters vulnerabilities, though the lack of a concrete conclusion to this story thread (as well as another short-changed plotline dealing with her absentee father) feel less like an attempt to emulate the open-endedness of reality and more like clunky storytelling, at least to me.

Meanwhile, adjusting to an arranged marriage is what Darwan has to deal with in his home life, which comes in addition to the struggles of maintaining his two jobs and dealing with daily bigotry. Actually, a moment where two passerbys hoot, holler and call Darwan "Osama Bin Laden" may be the most effective of the entire film, mainly due to how Kingsley handles the characters response to this event. After telling the hooligans to knock it off, Wendy asks him if he deals with this a lot, and his response is a simple "Every day".

There's a weary, but determined vibe in Kingsley's delivery of this response, and his ability to shepard that kind of nuance into the film is the foremost reason why Learning To Drive remains diverting. When this movies dealing with the more been-there-done-that dramatic elements of Wendy's storyline, the feature does feel tired, but once it switches over to its main duo and their quest to master handling an automobile? That's when Learning To Drive manages to truly work, especially when Clarkson clashes with Kingsleys humorously understated demeanor.
Posted by Douglas Laman (NerdInTheBasement) at 10:20 AM