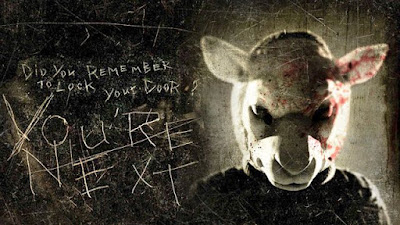 The history of cinema is littered with box office flops that didn't deserve such a dreary financial outcome. Scott Pilgrim vs. The World, The Iron Giant, and a notable entry in that category is of course the 2013 horror film You're Next. It's a crime that the infinitely more cookie-cutter The Purge grossed so much that same summer while You're Next (which deals with a family being attacked by masked invaders) faltered, but whatever, that's in the past. What matters now is that Adam Wingard's excellently frightening feature exists, and hey, you can watch it tonight!


Wanna see Sharni Vinson play Erin, one of the best horror movie protagonists in ages? Wanna see squirm-inducing kills and thrills play out on-screen? Wanna watch a plot that actually feels unpredictable, encasing you in the uncertainty fueled mindset of the victims of this home invasion? You get all that and much much more in this horror gem, which deserves far more attention than it's received since its release. Oh well. At least (A), like I said, you can watch it tonight on Epix Hits, and (B) Michael Fassbender wore one of the animal masks donned by one of this movie bad guys at the X-Men: Days of Future Past Comic-Con panel two years back.

That last part is no joke by the way. How freaking cool is Michael Fassbender?

You're Next airs at 8 PM eastern time on Epix Hits.
Posted by Douglas Laman (NerdInTheBasement) at 8:33 AM

Email ThisBlogThis!Share to TwitterShare to FacebookShare to Pinterest
Labels: 2013, Adam Wingard, Epix Hits, Film On The Television, Michael Fassbender, You're Next