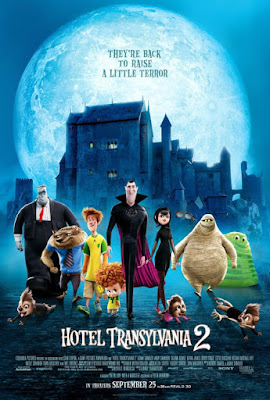 There are a few parts of Hotel Transylvania 2 to admire, but the structure of its plot is most certainly not one of those positive aspects of the feature. At first, the primary flaw to be found in how it dishes out is story is the rapid pace at which it goes through various plot developments (the marriage between vampire Mavis and human Johnny, then the reveal of Mavis being pregnant, giving birth and then flashing forward to when the offspring is a few years old) that honestly could have filled out further Hotel Transylvania chapters in their own right.

Going through all this plot in such a rapid fire manner left me unimpressed with the movies lack of focus, and even when it manages to concentrate on a singular plot thread for an extended period of time, the film can't help but undercut any sense of narrative flow with a variety of cutaway gags that are completely unrelated what's going in the story. One or two of these sort of gags (which do die down in the last half hour or so of the movie) are funny to watch, but they're more distracting than anything else.

So, what exactly is the plot of this movie that these cutaway gags keep undermining? Well, Dracula (Adam Sandler), the father of Mavis, is elated to have a grandson, Dennis, but the fact that Dennis has both vampire and human parents means that he, as well as everyone else in the titular hotel, is unsure if the boy will be a vampire or a human. Kids have until they're six to become vampires (via growing fangs), and with Dennis's sixth birthday fast approaching, Dracula attempts to kickstart the inner vampire traits that Drac is sure Dennis has within him. Meanwhile, Johnny (Andy Samberg) takes Mavis (Selena Gomez) to his parents house in the human world.

It's as convoluted as a story as it sounds, with the mythology of the world not making much sense. That being said, there are some interesting allegories to be found in the plot, with the characters plights for acceptance being depicted as parallel to the struggles of the LGBTQA community and racial minorities. For instance, Mavis and Andy are referred to as a "mixed couple" by Andy's mother and the concept of monsters and humans intermingling is one that Dracula's father, Vlad (Mel Brooks), is not open to. Meanwhile, Dracula's refusal to accept the idea that his son could be human shares similarities to the way certain parents can't come to terms with their own offspring's homosexuality/bisexuality etc.

Props for even attempting to incorporate these layers into the script, but there's nothing really done with these concepts once they're introduced into the motion picture. To boot, the conclusion to both plotlines are both non-existent, with any sort of insightful ending to these personal struggles being cast-aside for a (sigh) song-and-dance number to a Fifth Harmony song. What a pity it falls short in that department considering how, as pointed out to me after seeing this movie, classic horror movies that featured characters seen in this movie like Frankenstein typically had well-executed socially relevant subtext in their stories.

Now, allow me to take this moment to reiterate something I've been saying for ages: DON'T JUST HIRE CELEBRITIES FOR VOICE-OVER WORK JUST FOR THE SAKE OF GETTING CELEBRITIES. Seriously, it's amazing how well actors with actual experience in utilizing their vocals in their comedy (namely, Mel Brooks and Keegan-Michael Key) do with their characters in this movie compared to people like Adam Sandler who are obviously only being brought in to promote the movie on Jimmy Fallon. Just like in the first Hotel Transylvania, the worst voice actor of the bunch here is Andy Samberg, an immensely talented guy who just sounds bored and distant in every single scene. There's a even a few moments where the infliction of his voice doesn't match his character at all and it's just bizarre to witness.

Director Genndy Tartakovsky continues to push CGI animation in interesting ways with this movie, enhancing the squash-and-stretch design of the characters and environments in a way that makes for a number of unique visual gags. I do wish the redesigns of the characters didn't look so distractedly off-model in a number of scenes, but I do appreciate the work put in by the animators at Sony Pictures Animation for doing something a bit more unorthodox. It's one of the aspects of Hotel Transylvania 2 that shows real craftsmanship, while most of the rest of the film doesn't ever plummet to the depths of "bad", but just settles for being a mostly banal trip to the bijou.
Posted by Douglas Laman (NerdInTheBasement) at 11:31 AM