The Diary Of A Teenage Girl Review 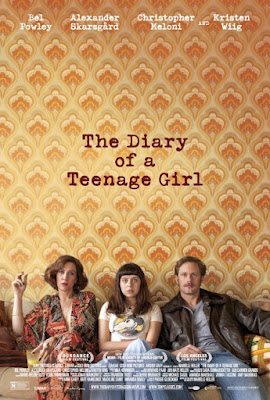 Minnie (Bel Powley) is such a unique and captivating protagonist, I feel like celebrating her nuanced personality, a triumph of top-caliber writing, with some sort of parade. She's 15, enthralled by everything related to sex and carries with her pervasive feelings of insecurity and a delightfully bold personality. She's the kind of person convinced she's fat and then proudly declaring in a letter to a man that's insulted her that some people enjoy, nay, adore larger women, thank you very much.

Yes, Minnie may be weighed down by her own worries, but juxtaposing them against her endlessly intrepid demeanor keeps her actions simply unpredictable. When the two sides of her identity fuse together, the results can be extremely humorous, but they also can become nothing short of heart-breaking to watch. These somber moments where Minnies concerns about herself, her future and whether or not she'll ever be loved are among the movies best, thanks to actress Bel Powley (who I'll discuss in greater detail soon) lending gravitas to the delivery of the dialogue, which commands an authentic presence in the lowest points of Minnies outlook on life.

An excellent example of the motion pictures robust writing can be seen in Minnies explanation for kissing an older man named Monroe (Alexander Skarsgard), which is simply that she was "...worried [she'd] never get the chance again". There's a painful urgency seeping into her audacious tendencies and it's that sort of emotional juxtaposition that makes her feel like a real human being. She's not some executives vision of what a "modern" teen acts like, she's an individual charged by her vulnerabilities and a valiant spirit.  Seeing Minnie grow as a person through the movies numerous plot points (which include numerous sexual encounters as well as becoming more passionate about being an artist) is a captivating experience. That's partly because the situations she finds herself in feel exceedingly authentic, dramatic occurrences that crop up don't feel like shoehorned in contrivances. But another major component of the films dramatic success is because Minnie is so well established as a unique character that it's impossible not to get wrapped up into her struggles and triumphs.

We, the audience, are allowed glimpses into Minnies mind via monologues mostly delivered by her speaking into a tape recorder and occasionally accompanied by animation inspired by the work Aline Kominsky-Crumb. The Diary Of A Teenage Girl is the kind of motion picture that serves as a startlingly brilliant reminder of how much of a collaborative process any given movie is. Bel Powleys acting, the striking animation and the dialogue in Phoebe Gloeckners screenplay all work as great elements in their own right, but combined in the context of this story? That's when magic happens, that's when true blue cinematic goodness occurs.

The journey of self-discovery that Minnie undertakes is one set in 1976, a fantastic time period for this voyage to occur, given that this was a year in an era where the role of women in society was shifting considerably. The "good housewife" archetype of the 50's was no longer the only largely accepted role a woman could step into in American society. Depicting Minnie uncovering who she truly is with the help of embracing sex in a manner not traditionally associated with women in decades prior to the 60's and 70's in this specific era of change and growth is a subtle, but very thought-provoking choice that's a symptom of the layer writing Gloeckner brings to the motion picture. Like Minnie herself, there's way more going on underneath the surface of this tale than one can catch in just a quick glance.

Since I've gone into such wordy detail on Minnie, perhaps its time for me to focus on Bel Powley, the actress responsible for bringing her to life. While much of the movies charms stems from its whip-smart dialogue, Powley can use just a singular facial expression of anguish to convey untold amounts of pain. In the course of this tale, Minnie goes through a wide range of emotions, from damaged to confident (sometimes bringing both to life in the span of seconds!) and my God, Powley just knocks it out of the park with whatever she's given. An immense amount of naturalism emanates from the actress that's a considerably important part of why the character works as well as she does.

In the supporting cast, Kristen Wiig provides ample amount of humor in her turn as Minnie's mom (a scene depicting her and a friend using cocaine is a particular hoot) and her dynamic with her daughter has a guileless vibe to it that helps sell the realism of Minnie's home life. Just as I'm diving into the supporting cast, I feel like I'm only getting started in terms of describing the countless virtues I found in The Diary Of A Teenage Girl, but allow me to just simply say: go see this movie. It's a gem of a motion picture that concocts, in addition to some strong directing from Marielle Heller (this is her first movie and man oh man am I pumped to see where she goes as a filmmaker next) and incredible writing, comes with one helluva lead character in Minnie, an endlessly fascinating protagonist like no other.
Posted by Douglas Laman (NerdInTheBasement) at 9:03 PM