A Look At The Deleted Scenes Of Avengers: Age Of Ultron 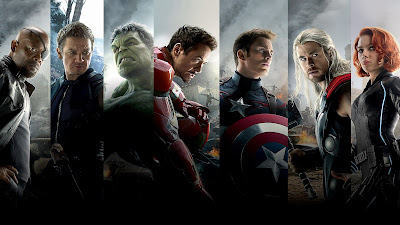 Allow me to be blunt here; someone uploaded all the deleted scenes from Avengers: Age of Ultron straight from the Digital HD release (that's a fancy word for saying the iTunes or Google Play version) onto YouTube. I watched the video, which has somehow stuck around for four days, but I won't upload it here in this editorial where I'm discussing these sequences. I'll describe the scenes, but frankly, I already feel uncomfortable enough giving such illicit content this kind of promotion by discussing it. The least I can do is not upload the video itself and give it further views. I urge you to skip viewing it and just settle for my descriptions of the scenes in the video.

That all being said, the deleted scenes of Avengers: Age of Ultron are particularly interesting because a lot of media hoopla got made about the sequences cut from the movie, with Joss Whedon noting in interviews that he and Marvel had different viewpoints certain sequences. This kind of discourse is normal on any film, but frankly, a number of media outlets, looking for clickbait headlines to drum up page views (no really, go back and look at a number of high-profile Age of Ultron reviews and notice how many of them spend only mere sentences talking about the film itself and spend the rest of their column on a tirade about how Marvel is "ruining movies") took these comments to mean "AVENGERS AGE OF ULTRON RUINED BY EXECUTIVES!!! MARVEL IS SATAN!!!"

A measured response from Whedon two months ago noting how Age of Ultron had compromises in it, but was also one of his most personal works pretty much lined up with what I'd always thought had happened in the movie, which I happily stand by as one of the best creations to stem from the Marvel Cinematic Universe and one whose weighty themes are a major part of its charms. Movies are a collaborative endeavor, but that sort of collaboration shouldn't come at the price of a filmmakers vision, and in my book, Whedons fingerprints are all over the film. Anywho, the back-and-forth between Whedon and Marvel left many scenes on the cutting room floor, which I'll be examining in this piece in spoilery detail. Let's look at three deleted scenes (one of which is pretty extensive in length) from the movie and hear my thoughts on them, as well as my verdict on whether or not they should have been cut, shall we? 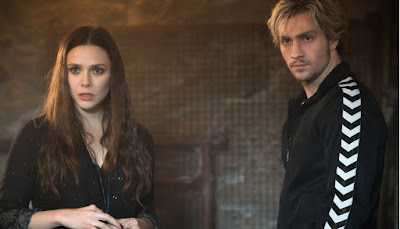 Deleted Scene #1: Scarlet Witch & Quicksilver In Sokavia
Captain Americas parental bond to The Twins is an interesting one, since he himself notes that he and this super-powered duo both had a "...German scientist experiment on them to save their country." That sort of loyalty that the two have to their home country, Sokavia, is put front and center in this deleted scene, showing Quicksilver passing out medicine to various Sokavia residents, including giving an elderly gentleman some much needed medicine and Quicksilver presenting a woman with a pretty dress. Scarlet Witch interrupts his flirting, the two have a brief conversation and then the son of the woman Quicksilver was hitting on tells The Twins someone wants to see them in a church. A man the child dubs Iron Man, but who is really Ultron.

The sequence obviously was meant as a way to show where the two characters went after the opening battle and segue into the scene in the film of them meeting Ultron for the first time. I like the first bit in this sequence of Quicksilver helping various citizens, but good God, the dialogue in the exchange between him and Scarlet Witch is clunky as hell. She literally tells him "You keep stealing things (referring to the dress) and you'll get shot!", which, no, that's too on-the-nose. Demonstrating Quicksilvers ability to be wounded by a bullet is handled far better in a visual gag later in the film, rendering this exchange both unnecessary in the grand scheme of the story and as a lackluster example of exposition in its own right.

Also; like the first Avengers movie, a female civilian that gets saved in the climax of the motion picture has a deleted scene that gives her some more screentime. Yes, the woman who gets a dress from Quicksilver is the lady whose son Hawkeye goes out to sa
ve. I'm particularly glad this part got cut out, as it could have made the world of Age of Ultron feel too small. The whole point of these heroes is that they'll save any civilians, regardless of who they are. Making her more of a random individual in the final cut of the movie is a much better move in my book.

Should It Have Been Cut?: I'm OK with the scene in this form being cut, but I actually wouldn't have minded seeing The Twins helping civilians. However, I wish both Quicksilver and Scarlet Witch could have been seen helping members of the community and they should have been alerted that Ultron wanted to see them by someone else.

Deleted Scene #2: Ultron Is Out And About...Now What?
This mainly consists of small dialogue differences, but I do think they're worth talking about. The morning after Ultron introduces himself at the party ta Avengers tower, the various members of the superhero group are trying to figure out where the maniacal bot will go next. A small exchange between Maria Hill and Captain America is the first major difference in this scene, while a brief extension of Hawkeye being caught on his cell phone has Captain America delivering one of the movies worst lines (when Hawkeye notes how he's still waiting on his contacts to give him any new info regarding Ultrons location, Cap retorts"Wait faster!"), which I will now thank God every day was cut from the final product.

This scene contains an exchange that, in my book, should have most certainly been kept in, which involves Rhodey (Don Cheadle) talking to Black Widow and Iron Man via video chat, explaining that Ultron has sent the military's various weapons and technologies into a state of chaos. This means War Machine is being deployed by the government to various missions to help keep the peace, which explains why War Machine vanishes after partaking in the very first fight against Ultron. Plus, it offers a nice moment of compassion between Tony and Rhodey, as Stark gives his pal a piece of technology to ensure that Ultron can't hack into his armor.

There's only a smattering of extra bits of lines here, though I do love the part where Tony notes how Ultrons rage likely stems from Bruce Banners involvement in the project. Less successful is some hand-waving courtesy of Thor, who notes Heimdall (Idris Elba) can't transport him back to Asgard because he's "...either not watching or not allowed to [bring Thor back]". Oh, and Tony makes a Banksy reference upon seeing a bloody note left above Struckers corpse.

Should It Have Been Cut?: "Wait faster" should be buried deep deep deep beneath the ground, never to see the light of day. Most of the rest of the scene I can take or leave, though I do wish Tony taking note of Banners connection to Ultron and especially the explanation for why Rhodey exits the picture had stayed in the final cut. 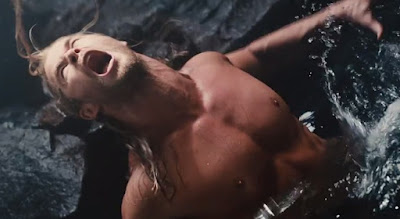 Deleted Scene #3: Thor Goes For A Dip
Lots of elements of Age of Ultron drew ire from certain moviegoers; the Hulk/Black Widow romance (for the record, I was all set to hate that pairing and ended up loving them as a couple) was one such entity, but Thor's sidequest to discover how to defeat Ultron may have drawn the greatest amount of outrage. Many called it rushed, whittled down to the bone in the editing room. I didn't find it to be terrible or even all that bad (I'd heard horror stories about the subplot for a number of days prior to seeing the film, so I was prepared for it to just ruin the movie), but I actually agree it's the least developed portion of the feature. It feels like Joss Whedon is in a hurry to get Thor back to The Avengers, so he got his entire journey down to its barest essentials. It's not perfect, but it didn't distract me from the film at all, though I was interested to see the original version of the sequence.

Ever since the film came out, it's been an open secret that the sequence was heavily altered in the editing room, reducing Erik Selvig (Stellan Skarsgard) to pretty much having no purpose in the scene. But in its original form, there was indeed a reason for Thor coming to him. Ya see, in this deleted scene, it's noted that the river Thor dips in, in order to gain knowledge on how to conquer Ultron, will allow him to gain answers from the immensely wise Norn, an entity from Greek mythology that will inhabit Thor's body once he goes into the river. Once Thor is taken over by the Norn, Erik can ask him various questions about how to take down the robotic foe terrorizing Earth.

The full plan plays out just like that in this deleted scene, with Chris Hemsworth getting the chance to ham it up once his character is taken over by the ruthless Norn. What's interesting about this scene is that, unlike the past two deleted sequences, which were mostly small scale conversations, everything that happens to Thor in this cave likely would have had various visual effects and other content (most likely some of the Infinity Gems footage we saw in the final cut) spliced into it in the final version. Thus, it makes judging the scene in its current form on its own merits a tricky proposition, but one I'll attempt to undertake none the less.

Should It Have Been Cut?: I actually get why there was a lot of behind-the-scenes apprehension on Thor's voyage into (Greek myth) mysteries, as you're basically introducing this all powerful entity (the Norn) not just into the film, but also the entire cinematic universe for basically just one scene uber late into the movie. Watching Hemsworth ham it up once the Norn takes over is fun to watch though, no question about that, though following up this sequence of him talking about the Infinity Stones with another scene of him explaining the power of the Mind Stone to The Avengers once The Vision comes to life could have come across as monotonous, hence why they likely went for a purely visual approach for how Thor discovers the secrets of the universe in this cave.

Two quick things I'll note about this scene; the first is that I'd love to have an establishing shot of where exactly this cave is on Midgard. In both the deleted scene and the finished film, the audience is never made clear where exactly Thor and Erik are and I wouldn't have minded that bit of context at all. Secondly, Jane Foster should have been going along with Erik for this journey. Watching her react to Thor being consumed by the Norn could have given more emotional context for the extended version of the sequence staying in the motion picture.

Bizarrely, by the by, all the footage Tom Hiddleston shot for the movie (which would have been part of the vision Thor receives from Scarlet Witch) as Loki has not popped up yet, and to my knowledge and is not on the Digital HD or Blu-Ray release of the movie. Kind of peculiar they're keeping that content under wraps, as proclaiming "EXTRA SCENES OF LOKI" woulda shipped thousands of Blu-Rays of the movie, I can guarantee ya that.
Posted by Douglas Laman (NerdInTheBasement) at 7:42 PM