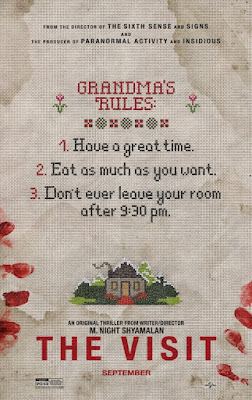 Recent directorial efforts from M. Night Shyamalan have stirred up enough fury that they might as well be a road that Tom Hardy and Charlize Theron drive down. Truth be told, the negative reception for such features has been much deserved; After Earth and The Last Airbender are astounding examples of what happens when a motion picture ceases to merely be a film and transforms into an exercise into discovering how abysmal one film can become. Interestingly, aside from the 2008 feature The Happening, Shyamalan has mainly avoided the realm of horror and thrillers that gave him a career in the first place, instead channeling his creativity into the world of sci-fi and fantasy.

With his newest movie, The Visit, Shyamalan proves you can go back home again, as he's finally made another motion picture that relies more on a tension-laced aura than trying to wring emotional potency out of a character named Cypher Raige. A simple storyline fuels the proceedings, solely focusing on two kids, Becca (Olivia DeJonge) and Tyler (Ed Oxenbould) visiting their estranged grandparents for a week. As their elderly relatives begin to act more and more unusual, the "short" week long stay begins to feel like an uncertain eternity for the youngsters.

Perhaps the most surprising element in this film, at least to me, was the presence of humor in the feature. One aspect of Shyamalans most recent efforts have been their somberness, an unwillingness to embrace any sort of wonder or joy. Being a scarier film, The Visit doesn't find time for much wonder, but it does smartly utilize jokes as a way to keep the audience uncertain on if these grandparents truly are malicious. It's a clever and subversive move that kept me perturbed, far more so than if the film had just gone for the easy route of employing a thousand unimaginative "jump scares".

Of course, the film does take on a more overtly scary tone later on in the film, which would be fine if the attempts to lace in humor in these specific sequences didn't leave a weird tonal dissonance. Cutting between a scene meant to be legitimately frightening and an extended gag involving fecal matter just didn't do the trick for me. What a pity considering that much of the light-hearted material earlier on in the story did do a great job of creating an unsettling environment that effectively clashes with the more mundane environment the two siblings are staying at for the week.

Even moreso than the presence of humor, the performances by Olivia DeJonge and Ed Oxenbould are a major reason why The Visit is able to function as an entertaining thriller. The two have a dynamic as siblings that feels mighty genuine, and having that sort of relationship between the two provide a grounding of sorts for when the movies ramps up the scares is acutely executed. DeJonge's character, Becca, is also the reason why the film adopts a found-footage style of filming, as Becca is an aspiring filmmaker looking to film her visit to her grandparents as part of a documentary.

It's a smarter reason than the rationale most horror films (*cough*The Gallows*Cough*) cling to in order to justify why characters are always lugging around video cameras. Even better, this shooting technique doesn't distract from the film...for the most part. Similar to the balance between the humor and horror, the final scenes of The Visit begin to strain ones suspension of disbelief. It becomes harder and harder to figure where or why a camera is where it is, and I can't help but feel that taking a page from the likes of District 9 and Chronicle and finding alternative ways to depict footage in these later portions of the movie would have been a better move. Even with that foible bringing down its final moments, The Visit is a highly suspenseful and well-crafted venture that managed to toy with my expectations in a keen manner. Hey Shyamalan! More movies like this, less movies like After Earth please!
Posted by Douglas Laman (NerdInTheBasement) at 1:49 PM