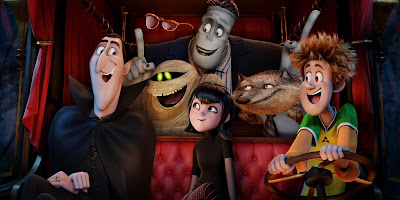 This marks not only a major win for Sony Pictures Animation (Hotel Transylvania 2 appears to be on track to be their first movie to gross over $150 million domestically), but also a major win for Sony/Columbia Pictures this year. While they had non-stop duds for the first eight months of the year (Chappie, Aloha and Pixels all underperformed), in recent weeks they've turned things around with films like War Room, The Perfect Guy and now Hotel Transylvania 2. With films like Goosebumps, Spectre and The Night Before still on the horizon, the rest of 2015 looks promising for the studio.

Coming in at second place this weekend was The Intern, which grossed $18.2 million over the weekend. That's above the openings of past Nancy Myers films like Something's Gotta Give and The Holiday, though it is below her previous movie It's Complicated. It's also a bit above recent Robert De Niro comedies like The Family and Last Vegas, though it's actually a bit below the opening weekends of other small-scale comedies Anne Hathaway has done in the past like Bride Wars and The Devil Wears Prada.

This is a solid opening for a movie with a small-ish budget (it only cost $35 million, which is way below the $85 million budget of It's Complicated), but it might have done better if the marketing could have conveyed either (A) more memorable gags, or (B) some element of conflict into the proceedings. Still, that's a minor gripe for a film that might actually stick around a while at the box office, since it can serve as more light-hearted counter-programming to future movies that are more intense like The Martian or Crimson Peak.

In third place this weekend was last weekends victor, Maze Runner: The Scorch Trials, which got burned this go-around with a 51% dip. That's actually a much better second weekend hold than the ones experienced by a number of this years much more high profile summer blockbusters, but it is larger than the 46% second weekend dip experienced by the first Maze Runner. The Scorch Trials has now grossed $52.4 million and should wind up somewhere between $75-80 million domestically when all is said and done.

Everest mounted its way up to fourth place this weekend, grossing $13 million for a $23 million domestic cume. Right behind it was fellow September 2015 holdover Black Mass, which grossed $11.5 million this weekend for a 10 day total of $42.6 million. This one experienced a harsher dip than The Town at the same point and may have trouble sticking around in the weeks to come. The final new release of the weekend, The Green Inferno, was all the way down in ninth place, grossing $3.4 million in 1,540 theaters. Looks like the smaller scale release for this Eli Roth film was a smart one, as it didn't seem to have much appeal outside of hardcore horror movie buffs.

Breaking into the top ten this weekend was Sicario, managing to gross $1.7 million at only 59 theaters this weekend for an incredible $30,000 per theater average. Lionsgate is planning to take the film into wide release this coming weekend, and it'll be interesting to see if this feature can translate its immense success in limited release to the new theaters it'll inhabit this coming weekend. Pawn Sacrifice also added to its theater count, though it went into wide release this weekend with 781 theaters. It only attracted so-so results in this expansion, grossing only $1 million over the weekend.

Also in limited release was Stonewall, which bombed in 129 theaters grossing an anemic $108,000 for the weekend. 99 Homes also debuted in limited release over the weekend, doing decent business at only 2 locations for a $33,000 opening and a $16,500 per theater average. Broad Green Pictures, as of this writing, plans to take 99 Homes into wide release on October 9th. Finally, A24 debuted the Sundance 2015 feature Mississippi Grind into one location for a solid $14,000 haul.

The Top 12 this weekend grossed $127 million, making it by far the biggest September weekend of all-time and up 30% from this weekend last year when The Equalizer ruled the box office.
Posted by Douglas Laman (NerdInTheBasement) at 11:26 AM