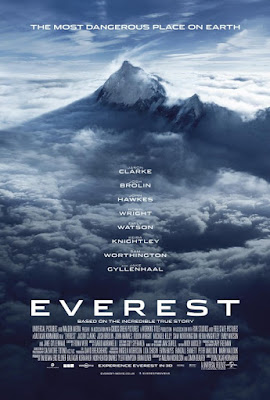 From the studio that brought you The Pirates Who Don't Do Anything and Legal Eagles, comes Everest, a harrowing tale of human courage and determination. A group of mountain climbers, led by Rob Hall (Jason Clarke) begin an expedition to climb to the top of Mt. Everest, a task that proves to be one not for the faint of heart. However, their daunting undertaking proves to be even more challenging once an enormous storm arrives, leaving many of the climbers stranded and fighting for life trying to get down the mountain.

Before we get to that part of the story though, Everest spends a large amount of time setting up its group of characters, which include Beck (Josh Brolin) and Doug (John Hawkes), through ways both subtle and blatant (Dallas, Texas resident Beck wears a Dole/Kemp 1996 T-shirt in his introductory scene). It all feels a touch strained, especially since the majority of the character development is rote and doesn't truly come into play when these guys are in peril on Everest. These sequences feel less like engrossing dramatic content and more like screenwriters William Nicholson and Simon Beaufoy setting up these characters as bowling pins that the "bowling ball" that is Mt. Everest can knock down when the proper time comes.

But we've got time to kill until everyone is ready to climb that mountain, so, in the meantime, Everest puts its energy into some clunky character work. Even while focusing solely on giving some profundity to the individuals set to ascend Everest, some members of the team (like Yusuko Namba, played by Naoko Mori) get very little in the way of depth and others, like Beck, getting the same personality traits repeated over and over again. This section of the film also leads to the introduction of Scott Fischer (Jake Gyllenhaal), whose introduced tanning shirtless on a mountainside wearing a beanie. His over-the-top personality clashes so heavily with the more humdrum environment around him that, at first, his character left me more perplexed than anything else. Everyone else has one foot in reality and then here comes a character that gives Gyllenhaal the opportunity to do his best impression of The Dude from The Big Lebowski.

Truth be told though, once the feature moves past all that and gets everyone onto the mountain, watching the chaos ensue from these poor climbers being trapped in this daunting location is terrifying gripping. Actors like Clarke and Hawkes excel at presenting the mounting vulnerabilities pain their characters are enduring while never coming across as showy. Actually, that's the kind of accomplishment that extends to the script, which never depicts the pain or demise of certain characters in a way that tries to milk "spectacle" or "shock" from their deaths. In fact, it's the more sudden way various players in the story die on this mountain that leave more of a chilling impact than if they had gone the route of trying to do over-the-top death sequences.

Once the snowstorm arrives, the sound department gets to have one helluva showcase for demonstrating their craft, as the blistering sound of the storm bellowing down on the various climbers is astonishing to experience, especially with those IMAX speakers delivering the assorted subzero noises that Everest brings to the table. In fact, so powerful is their work that when the movie cuts from the climbers struggling to survive on the mountain to a base camp that's completely silent, well, the tranquility is almost disturbing to hear.  My ears had adapted so well to the harsher cries of the mountain that a shift to normalcy was downright startling.

The inability of Everest to properly execute its character development early on in the story is a crying shame, as the rest of the movie has a number of skillfully presented sequences of unabating terror. Once you get past those early inept sequences, Everest truly finds room to shine, especially in IMAX 3D. Actually, I should note that, in terms of how the format of IMAX 3D impacts the motion picture, the third dimension actually doesn't add much to the film, since most of the scenes are in smaller environments that don't offer the sort of depth 3D can enhance tremendously. But boy howdy do those IMAX speakers work miracles with the already impressive sound work.
Posted by Douglas Laman (NerdInTheBasement) at 12:13 PM