Synecdoche, New York And The Futile Pursuit Of Control

SPOILERS FOR SYNECDOCHE, NEW YORK AHEAD 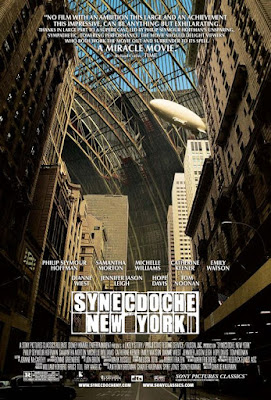 There are some movies that, once they conclude, leave me with the inescapable feeling of euphoria over seeing something incredible. Others leave me with a stormy cloud hovering over my head, with certain films being so absolutely dreadful that the only proper response to such movies existing seems to be tracking down all existing Blu-Rays of the motion picture and smashing them to dust. And then there's a film like Synecdoche, New York, which, upon ending, left me more perplexed than anything else. I couldn't figure this one out; had I watched something transcendent or a noble misfire?


Charlie Kaufman is the human being responsible for writing and directing Synecdoche, New York, and to say his approach to depicting this movies story is unorthodox is, well, an understatement on par with declaring that The Beatles sold "a few" records. In some spots, this motion picture makes The Tree of Life look cookie cutter in how it depicts pivotal plot points and its character inner quarrels. Yes, this is a challenging movie to grasp in certain sections, but I think that's why I was so fascinated by it.

I admired it's audacity to go for the atypical in every sense of the word, especially since it allows for the endless sorrow found in the tragic life of Caden Cotard (Phillip Seymour Hoffman) to blossom in all of disastrous "glory". Caden is our lead for this plot, and nary a scene can go by where he loses control of something. His body is riddled by ailments, his wife and daughter leave him via a "vacation" overseas and now he plans to use a MacArthur grant (which gives him a helluva lot of money) to put on a play of Brobdingnagian proportions. Here, he hopes to find some form of control, only for it to send even more parts of his life spiraling into chaos.

Ah, control. It's an element of the human psyche I've brought up in my writing numerous times in the past, and there's a reason why it pops up so frequently in the realm of art. Since the dawn of man, when the first cavemen yearned to control the sun that had the ability to vanish and plunge his world into darkness, the idea of controlling what we can't has inhabited the very fabric of storytelling. Most of the time, this desire for boundless control is shown to be a symptom of hubris, a desire that leads to pain, not enlightenment.

That long-standing concept makes it's way into Synecdoche, New York as one of its most pivotal themes, with numerous parts of Caden's life constantly being beyond his influence. Attempts to regain command of his existence prove futile more often than not; look no further than a scene where he see's his daughter again for the first time in over a decade. This is not a tender sequence depicting a heartfelt reunion; she's a stripper, dancing in a glass box that provides a literal barrier between herself and her father. During this scene, she never once acknowledges Caden, his cries of anguish to her not falling on her ears but rather being enveloped in the oblivion of despondency that we all must confront daily.

As the years pass, the sorrow in Caden's soul only grows, making his obsession with cleaning a none too shocking one. Not only does cleaning his ex-wife's apartment allow him an opportunity, however slim, to reconnect with a life long lost to a bygone epoch, but he also gets some form of control over something in his existence. Cleaning a toilet provides him some momentary bliss, a rest from the relentless anguish Caden grapples with. It's a small glimpse into something resembling serenity in this film, although the film takes a cue from the more open-ended nature of reality and forgoes conventionally warm-and-fuzzy conclusions to these sort of inner conundrums Caden faces. Instead, Kaufmans script is hellbent on creating more nuanced and agonizing scenarios for Caden to wander through. In any of these scenarios, Phillip Seymour Hoffman provides perfect evidence for why he's one of the greatest actors to grace the silver screen.

He can impart all the pain in his character in any given situation, no matter the scale. Need him to execute a moment of subtle distress? He'll ace it. How about a more over-the-top dialogue exchange, with a dab of absurdity for good measure? He's your guy. Frankly, if the acting in Synecdoche, New York didn't work, this entire movie might have come across an ambitious exercise that succeeds more at being overwrought than thought-provoking. Hoffman, thankfully, provides a soul to Kaufman's engrossing perspective on existence, one that helps make the characters woebegone personality all the more absorbing.

Doing further research into this project yielded the biggest non-surprise of all-time; Synecdoche, New York generated mixed reviews. I'd have been shocked if the film hadn't developed such a response, given how much it rails against conventionality throughout its running time. For me personally though, this is a movie that pushed my buttons, descended me into the most tormented parts of its character personality and had me captivated by how it's ambitious nature isn't used as a substitute for creating weighty characters and themes. I may have been unsure of how I felt about Synecdoche, New York when I first finished it, but after giving it some heavy thought, I'm convinced it's nothing short of a towering cinematic achievement.
Posted by Douglas Laman (NerdInTheBasement) at 12:11 PM