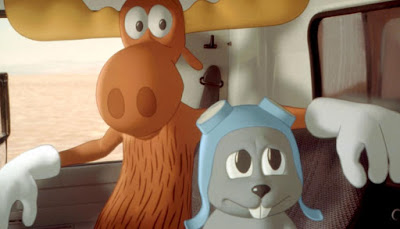 Many of the films chosen for this column are great pieces of cinema that need to be experienced if you haven't already partaken in them. This is not one of those films. The Adventures of Rocky & Bullwinkle is a bizarre turn of the century oddity, full of Muppet Movie style cameos and a turn by Robert De Niro  that was harbinger of terrible films and performances to come. Its devotion to not "updating" the titular characters in any notable way (though the internet as it existed in 2000 does factor heavily into the plot) might be admirable if the film itself was actually entertaining.

However, if you're an animation buff like me, the motion picture is worth a cursory viewing, at least for the purpose of seeing the most prominent modern day usage of these two characters (Rocky & Bullwinkle did appear last year in both a GEICO commercial and a short film that debuted on the home video release of Mr. Peabody & Sherman). Plus, the movie itself is nowhere near the abysmal level of the modern day Alvin & The Chipmunks and Smurfs movies and it is always a treat to hear legendary voice June Foray.

Like I said, this ones really nothing more than curiosity viewing at best, but I'll freely admit watching Robert De Niro in a monocle intimidate a cartoon squirrel is at least an experience that's....memorable?

The Adventures of Rocky And Bullwinkle airs at 4:25 PM central time on HBO Family.
Posted by Douglas Laman (NerdInTheBasement) at 7:44 AM

Email ThisBlogThis!Share to TwitterShare to FacebookShare to Pinterest
Labels: Film On The Television, Rocky & Bullwinkle