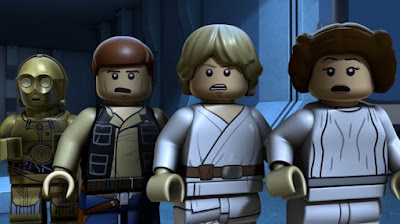 Ever since July 2011 rolled around, the world of Star Wars has been brought to life in the form of LEGO bricks via computer animated TV specials that have a comedic tone that poke fun at the various films and TV shows Star Wars has produced over the past 38 years. Considering how parodying Star Wars is almost as much of a pop culture mainstay as Star Wars itself, it's not shocking that these TV specials take the tongue-in-cheek comedy of the LEGO Star Wars video games and transport it to the land of television.

This newest endeavor is given a mouthful of a title, LEGO Star Wars: Droid Tales: Mission To Mos Eisley, the fourth part in a five part miniseries airing on Disney XD. In this specific story, which is primarily self-contained, the plot mainly focuses on two tales C-3PO tells regarding adventures he and R2-D2 (who he is searching for in these wraparound segments) have gotten into recently. The first story details the two droids encountering the main characters of Star Wars: Rebels, the other one retelling the plot of Star Wars (or A New Hope, as it's called nowadays) with a more comedic bent.

Centering the first tale around the cast of Rebels at first left me with a bad taste in my mouth, mainly because it feels like the most blatant example of corporate synergy one could get. Yes, this is a special devoting itself to basically retelling the tales of Star Wars to younger audiences and utilizes an extremely popular toy to do so. But The LEGO Movie proved that just because your movie can sell some toys doesn't mean it has to ease up on telling a good story and bringing in the stars of a currently running TV show (which also airs on Disney XD) into the fray just struck me as a piece of cynical promotion for the actual Star Wars: Rebels program and nothing more.

To be fair though, these specials seem to cover every aspect of Star Wars mythology imaginable, so maybe it was inevitable that they'd tackle the Rebels characters eventually. Still, the various members of that show provide very few moments of actual humor in their time onscreen, mainly because there's just not enough memorable imagery or characters from Star Wars: Rebels to skewer. That leaves the segment with a sense of pacing that makes it feel like it's just going on forever.

Thankfully, things pick up once C-3PO shifts over to telling the story of the original Star Wars movie from his perspective. It is interesting how this special (and, presumably, the other entries in this Droid Tales miniseries) reverts C-3PO and R2-D2 back to the archetypal characters they were in the original Star Wars films, that of the main characters (lest we forget, the opening scenes of A New Hope focus solely on these two droids). While the duo took a backseat to Luke Skywalker by the time the final battle against the Death Star arrived, their role in the plot seems to still resonate enough today to have an influence on the plot of this special.

Tackling various moments of Star Wars with a more satirical element yields far more successful bits of comedy than the previous Rebels segment, specifically moments involving why Obi-Wan Kenobi didn't change his last name while in hiding on Tatooine and a medal meant for Chewbacca. Not all of it works, but it's amusing enough, and the imaginative LEGO-inspired animation keeps even the most lackluster moments watchable. However, considering how reliant it is on comedy to carry its story, I seriosuly wish LEGO Star Wars: Droid Tales: Mission To Mos Eisley had more consistency in quality when it came to executing its humor.
Posted by Douglas Laman (NerdInTheBasement) at 8:00 PM