YAHOOO! The First Trailer For The Angry Birds Movie Has Flung Onto The Web! 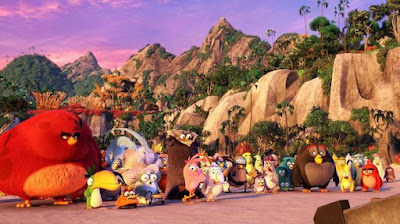 As weird as this may sound, I kind of get why an Angry Birds movie exists. I'm not saying it's guaranteed to be a masterpiece destined to be hailed as a cinematic masterpiece on par with the works of Jean-Luc Godard, but the franchise has already invaded the realm of animated shorts, so is a feature length film really all that implausible on a conceptual level? Plus, at least this one is aiming to be a family comedy, and not trying to be a dark gritty take on the mobile game fowl. If you're curious how an Angry Birds movie would look, well, the first trailer for it has dropped, and you can watch it below.

OK, I laughed at that. Red kicking some smaller bird into the ocean? That's the sort of dark humor The Far Side raised me on and I got a hearty chuckle out of it. Not all of the jokes work quite as well (namely Chuck's various Yoga poses), but I do like how the majority of the gags rely more on timing than hackneyed fart gags. I'm still not sure what exactly kind of story you could tell here, but who knows, maybe further trailers will surprise me by unveiling some really nuanced plotline.

Also; the animation here looks rather nice. This looks to be one of the first animated films taking the Despicable Me process (i.e. making a CGI-animated feature with actually good animation on the cheap by animating it overseas) and utilizing that to bring the budget down. Of course, most television animation is done overseas, but the difference with Despicable Me was that it actually looked like it belonged on the big screen (though Despicable Me 2, which used the same process, began to show its cost cutting methods too blatantly for my taste, with character models being overused to ad nausea). The Angry Birds Movie, I'm sure, won't be the last American animated feature to employ this process.
Posted by Douglas Laman (NerdInTheBasement) at 10:33 AM