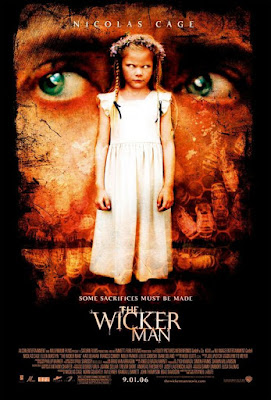 Allow me to say it once again; Nicolas Cage is a great actor. Films like Adaptation demonstrate the sort of acting accomplishments the man can achieve, making his transition into the laughingstock of the internet in recent years sort of befuddling. Yes, he's been popping up in a number of low-quality films since 2010, but really, it feels weird to boil down the entirety of Nicolas Cages career down to just some memes of him yelling "HOW'D IT GET BURNED???" That line of dialogue comes courtesy of The Wicker Man, a film released over Labor Day weekend nine years ago and one which provides....well, let's call it an interesting experience for now, shall we?

Being a cop isn't easy, but it's been especially difficult for Edward Malus (Nicolas Cage), who tried and failed to help a mother and daughter in a car crash. To my knowledge, this accident never serves any notable purpose in the plot, despite Edward repeatedly seeing a vision of the daughter being run over by an 18-wheeler. Such a sight is played entirely straight, yet comes off as little more than an opportunity to start the films pattern of mixing nonsensical imagery and plot details with an uber serious execution. This specific moment isn't helped by how the 18-wheeler just pops out of nowhere, a bizarre detail only made even more humorous by how much it reminded me of this moment from the ASDFmovie shorts:

Edward decides to move on from this weird vision and get on with more important matters; namely, finding out where the daughter of his ex-fiancee, Willow (Kate Beahan), who lives in a woman's only colony located on an isolated island (I think, it's definitely isolated, I'm just not 100% sure if it's an island or not) that's obsessed with bee's. Okee-dokee. Once Edward arrives to this island, the inhabitants of the colony act so peculiar and dismissive towards the officer that it's blatantly obvious something fishy is going on here. Played with a bit more subtly, they could have created an atmosphere driven by mystery and uncertainty, not a town populated by antagonists too overt in their villainy to be foes in a subpar Scooby-Doo episode.

Soon Edward is off to find clues regarding the girls disappearance, none of which contribute to developing his character, the tone or really even the plot. In fact, the story plays out like it was made up after screenwriter Neil LaBute (who also directs) came up with the twist ending and needing something to pad out the running time until they could get to the "GOTCHA!" moment. So while I wait around for the movies running time to conclude, I have to watch Nicolas Cage revisit the flashback of that fatal car accident multiple times and try to help lift some logs.

Truth be told, Cage is the only true redeeming part of this mess (aside from one or two interesting shots), his slowly escalating aggravation with this mystery and the inhabitants of this town leading to some delightful moments where he can cut loose, yell at people and run around in a bear costume. Cage is an actor thriving on the unusual, whether that's in dramas or action films, and there are a few moments in The Wicker Man where he can prosper, even if they are far and few in between.

There are some bad movies where I know why people let the end result out into the public, with the primary reason being that the film would likely make money regardless of quality (see: Trans4mers). But how did anyone at Warner Bros. watch the scene where Nicolas Cage wakes up from a dream on a dock, which comes complete with a comical "WHOOSH" sound effect when the camera pans out to reveal a "jump scare", and not think something had gone haywire in the filmmaking process? Perhaps they all realized some bad movie moments cannot be stopped, they simply must be. You and I, dear reader, we are finite creatures, doomed to walk this Earth for only a short while. Nicolas Cage asking someone if a bloody bag contains "a shark or something?"....that is truly eternal.
Posted by Douglas Laman (NerdInTheBasement) at 3:44 PM