The Legend Of Tarzan Review 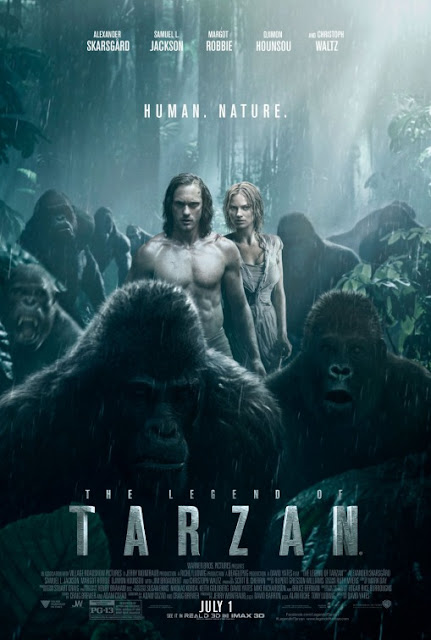 At this point, I'm as tired as big-budget blockbusters this summer sucking as much as anything else in my life. Sizzling hot Texas weather always make this time of the year one that I wish could just speed right along, but with dismal movies like Warcraft, Alice Through The Looking Glass and Independence Day: Resurgence roaming around theaters, well, it's making my yearly endurance of summer all the more difficult to manage. The Legend Of Tarzan, despite the notable pedigrees of the cast (seriously, Samuel L. Jackson, Djimon Hounsou and Christoph Waltz are incredibly talented individuals) and crew it's working with, is yet another dismal motion picture that has me begging for Labor Day to get here sooner rather than later.

Tarzan (Alexander Skarsgard), has ditched his jungle roots behind him and settled in London, England with his wife, Jane (Margot Robbie). He's coerced into returning to his home by high-level government officials, with Jane and George Washington Williams (Samuel L. Jackson) in tow, but discovers he's been double-crossed. Instead of him being called upon for a peaceful trip, it turns out Leon Rom A.K.A. Obligatory Christoph Waltz Bad Guy #83 wants to trade Tarzan over to a vengeful tribe leader in exchange for some diamonds. Leon kidnaps Jane and then Tarzan and George wander around in the jungle for a bit trying to catch up with Jane.

This is a premise so barren in the way of actual fun or character development that the sight of either of those elements would be treated as a miracle on par with the discovery of the lightbulb. Instead, prepare for Tarzan to engage in so many damn flashbacks that add nothing of worth to the story at hand and for a large share of the movies sets to be drenched in distractingly pervasive blue coloring for no good reason. And the characters are all static individuals who don't even change their wardrobes all that often, much less go through engrossing character arcs. Doesn't this sound like a riveting cinematic experience worth shelling out expensive IMAX 3D ticket prices for?

The main problem with this movie (and that's saying something considering the sheer amount of flaws present here) is Tarzan himself, a boring creation whose incarnation here adds nothing of note to a character whose existed for over a century. And then there's the performance from Alexander Skarsgard (who I should note was quite great in last years underrated gem The Diary Of A Teenage Girl), which is laughably abysmal. He delivers every line in a morose whisper while staring at the ground no matter what the tone of the scene or his dialogue is. Is he playing Tarzan or a human version of Droopy? I really couldn't tell by the end. Pairing him up with an energetic performer like Samuel L. Jackson (the only actor who really registers a presence here) only shows how devoid of life Skarsgard's performance is. He's not fun, he's not bad-ass, he's not heroic, he's not charming, he's not anything. You might as well call him a song from Taylor Swift's 1989 album he's such a blank space on-screen.

Tarzan's dire lack of noteworthy characteristics are a primary reason why a lot of the main story beats don't work, but he's far from the only element that's gone awry here. Jane is another facet of the movie gone horribly awry, an absolute waste of Margot Robbie. Her only purpose in the entire movie is to be a damsel-in-distress for Tarzan to rescue, which is really appalling considering she's the only female character of note in the entire movie. Plus, the few early scenes depicting the two in their normal lives together (that are obviously done to establish and get us, the audience, invested in their relationship ) are so poorly done, especially since Skarsgard and Robbie have zero chemistry together, that it's impossible to be invested in Tarzan's quest to rescue Jane.

And speaking of his quest to rescue Jane, Tarzan's various misadventures in the jungle have really no long-term bearing on the plot or individual characters. For instance, he re-encounters his ape brethren, including his brother who thinks of him as a deserter. We're not really given a concrete reason why Tarzan would be thought of as a deserter, but the main problem is his ape brother just beats on him for a little bit and then Tarzan and George Washington Williams just stroll along on their jungle journey. Nothing that they encounter really puts the characters into new places or strikes up exciting adventures. Everything's static, nothing's movie and thus a film that should have some form of propulsion to it just lays there, wilting away under the crushing weight of its own pathetically inert script.

David Yates seems to have lost any of the imaginative visual flair as a director that had a notable presence in his four Harry Potter films. Whereas those movies popped and sizzled with visual panache, here his greatest idea as a filmmaker seems to be to drench a number of sets in the color blue for no real good reason. Oh, and using handheld cameras for close-up shots, which also doesn't add much of anything to the production. And as if all of that weren't enough to sink The Legend Of Tarzan, the films inescapable "white savior" overtones in its story (which has various African tribes being enslaved and the one man who can save them all is a white dude who knows how to talk to crocodiles) somehow make the film even more uncomfortable to sit through. The Legend Of Tarzan is a feature film that's gone so haywire in its execution in every way it would boggle the mind if the finished product weren't so obscenely boring.
Posted by Douglas Laman (NerdInTheBasement) at 4:59 AM