We Didn't Start The Fyre, That's All Billy McFarland's Doing 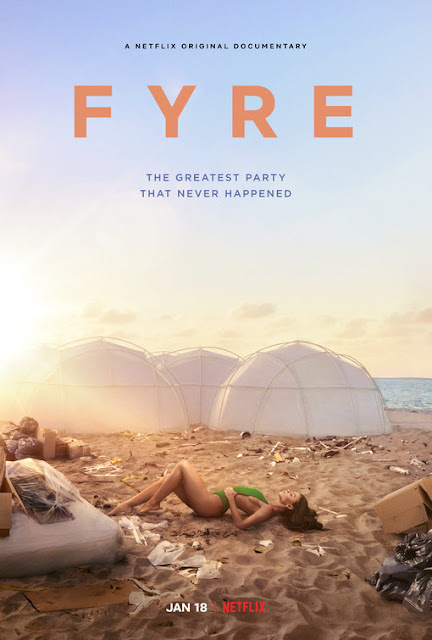 The Fyre Festival is a constant creator of turmoil, even when the saga behind this music festival sham is chronicled in documentary form, there must be chaos in the form of competing documentaries and valid concerns about the creative integrity of Fyre: The Greatest Party That Never Happened A.K.A. the one Fyre documentary that's on Netflix. Said creative integrity pertains to how crucial behind-the-scenes individuals involved with this documentary are also those who had a stake in the company involved in the Fyre Festival, which could make this documentary more of a PR move rather than a glimpse into what informed the madness of this music festival gone haywire.

For those who, like me before watching this documentary, unaware of the whole saga behind the botched Fyre Festival, it all comes down to Billy McFarland, a wealthy playboy who was constantly looking for the next big business venture that could catapult him to the highest possible societal status. Partnering up with rapper Ja Rule, McFarland decided to use his newest company, Fyre, to make a brand new music festival, an initiative they kicked off with simply an idea for what it could be rather than concrete plans or any iota of experience in hiring artists to perform or getting things set up for a music festival.

An early sequence in Fyre: The Greatest Party That Never Happened depicting Billy and Ja Rule trying to convince a bunch of models to come down and just frolic with them on the beach like they're in a commercial despite the models saying how they're extremely tired serves as a perfect distillation of the shallow attitude that drove Billy McFarland's pursuit of the Fyre Festival, he didn't see people as people but rather pawns he could move around at will. These models weren't human beings, they were items he could just shuffle about for his own amusement. His perverse sense of perseverance is what drove the Fyre Festival and leads to a large number of ludicrous scenarios that transpired in trying to get this enterprise off the ground.

Pilots who could tell right off the bat that trying to crowd a bunch of people on a private island without a proper plumbing system was a bad idea were abandoned from the project from the get-go and coworkers of Billy's held onto a hope of the Fyre Festival being the next underdog musical sensation in the making to get them through all the horrors of getting this show on the road. In retrospect, knowing that this is a documentary made in conjunction with people who were associated with the festival does make the tendency of Fyre employee interviewers to constantly remind viewers "I had no idea what was going on" to feel reminiscent of damage control, but at least they're balanced out with gripping and more emotionally raw interviews with workers in the Bahamas who were screwed out of ever getting paid for all their hard work in the Fyre Festival project.

In the last 45 minutes of the documentary, we get to the actual Fyre Festival, which is just a colossal disaster in every regard. Watching footage of people discovering the ramshackle tents they'll be staying in is a darkly humorous sight, as is seeing people turn to mutiny only a few hours into their stay on the island. Fyre: The Greatest Party That Never Happened chronicles a trainwreck that just never seems to stop collapsing, it's a tornado packed tightly with the follies of humanity, particularly the hubris of wealthy dudes like Billy McFarland who think they can just constantly scam people and suffer no consequences for it. Even when the documentary veers over into feeling like a PR move, it's still entertaining to watch just to see all that hubris-informed chaos unfold.
Posted by Douglas Laman (NerdInTheBasement) at 9:07 AM