Glass Is An Ambitious Follow-Up To Unbreakable And Split, For Better And For Worse 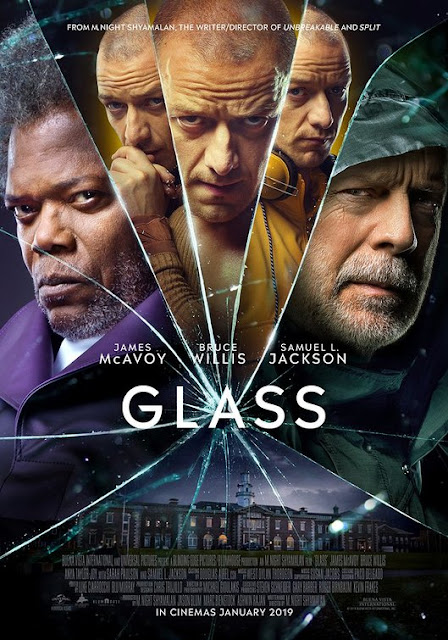 Just like most items that get sold on TV infomercials, Glass offers viewers the chance to get two things for the price of one. In this case, you get both an Unbreakable sequel and a Split sequel in one movie! This means M. Night Shyamalan's long in development follow-up to his 2000 motion picture Unbreakable has finally come to fruition, an exciting proposition for many including myself given that I consider Unbreakable to be Shyamalan's best work as a filmmaker. Glass does not reach the heights of either the excellent Unbreakable or the pretty good Split, but it does work as a solid film on its own merits, though it is one that can't help but feel messy in some key respects that keep it from being truly superheroic.

Taking place approximately nineteen years after Unbreakable and two weeks after the events of Split, David Dunn (Bruce Willis) is now using his super-powers of super-strength to dish out justice as a vigilante. Inevitably, this leads him to cross paths with Kevin (James McAvoy), the villain of Split who has 24 different personalities occupying his body. In the middle of a fight between David and Kevin, the pair are taken into custody and held in a psychiatric hospital at the orders of Dr. Ellie Staple (Sarah Paulson), who treats people suffering from a disorder that has them believing they came out of a comic book. Also locked up with these two in this hospital is Elijah Price (Samuel L. Jackson) and when you put these three together in one location, trouble is bound to eventually brew.

It becomes quickly apparent that Glass works best when it's functioning as an Unbreakable sequel. Like that earlier film, Glass is a meditation on what it'd be like for super-powered beings to exist in our world that intersects with characters going through intimate struggles with what their purpose is. The elements of Glass building upon those thematic foundations as well as characters from Unbreakable tend to work best in Glass, particularly the unexpectedly affecting dynamic between David and his now grown son, Joseph (Spencer Treat Clark) as well as another haunting flashback of Mr. Glass as a child.

Meanwhile, the weakest elements are the ones continuing off from the story of Split, which is weird because that films main character, Kevin, is brought to life through one of the films best performances. Shyamalan seems to have realized audiences loved seeing McAvoy shift in and out of the different personalities of this character in Split and has dedicated a number of scenes here for McAvoy to chew up the scenery by portraying the numerous individuals inhabiting Kevin's body. McAvoy's performance may be as entertaining as ever but the storyline involving Casey Cooke (Anya Taylor-Joy), the sole survivor of Kevin's rampage from the first movie, and her relationship to Kevin is completely botched and drags the whole film down considerably.

Having Casey now be enamored with helping Kevin despite the fact that she spent the entirety of Split trying to get away from him by any means (including shooting him in a climactic shootdown) rings completely hollow, it's as believable as a survivor of a Friday the 13th movie returning in a future movie to vouch for the humanity of Jason Voorhees. Shyamalan is clearly trying to make Kevin and Casey parallel storylines for how people with traumatic childhoods respond to their trauma, but he's exploring a grander thematic idea at the expense of the individual character of Casey. She's now had all of her agency and individuality ripped out so that she can constantly call for people to recognize the humanity of a bloodthirsty monster who works better as an over-the-top foe than as a nuanced antagonist like Mr. Glass.

That's the main problem with Glass as a whole, Shyamalan is a man never bereft of ideas, in fact, his weakest films (like The Last Airbender or After Earth) are where he's clearly left all his creativity at home. There's lots of interesting thematic concepts running around in Glass and when they manage to align nicely with previously character arcs, like the vast majority of the plot elements revolving around the Unbreakable characters, they work quite well. But the majority of the story details surrounding the returning Split cast members see him trying to fit a square peg into a round hole, Split and its characters worked best when they were in monster-of-the-week movie mode, not when they're functioning as meditations on the humanity of super-powered individuals like Unbreakable.

Though the dissonance between the Split characters & plot elements and the overall tone of Glass is quite sloppy in execution, at least on a production level the movie is actually pretty solid, including a lot of lovely directorial flourishes (like a recurring visual motif in the form of the camera taking on the point-of-view of in-movie characters) that show some real consideration. The performances are also all-around solid, including Bruce Willis giving one of his more lively performances in eons and Samuel L. Jackson returning to the Mr. Glass role so beautifully it's like he never left it. Much of Glass is all-around agreeably competent and even rises to the level of quite thought-provoking a number of times but the biggest problem here (in addition to other flaws like clumsily filmed fight scenes) is that Shyamalan's thematic ambition has a tendency to exceed the grasp of his script.
Posted by Douglas Laman (NerdInTheBasement) at 9:55 AM