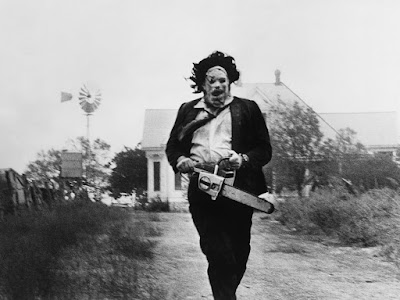 As a lifelong fan of country music (don't @ me) and a lifelong devotee to movies, I'd be lying if I said it had never crossed my mind to merge the two of them through the process of parody songs that the likes of Weird Al Yankovic have mastered so well. Tragically, I cannot sing and have no experience writing songs, so my dreams of merging Kenny Chesney tunes with Akira Kurosawa movies shall always remain just that, a dream. But luckily, The Merkins have taken this idea and made Friends With No Faces, a Texas Chainsaw Massacre themed parody of the Garth Brooks song Friends In Low Places. The result is something far more hysterical than I could ever hope to make.

Attempts at viral videos that merge two seemingly disparate pop culture properties together are a dime-a-dozen but they're not usually this much fun to watch nor as well-crafted as this one. This is an impressively realized video. The vocals of Nate Vaill channels Garth Brooks nicely while the sharp writing ("My kin uses bone for decor") brilliantly twists the structure of the original lyrics into some more demented. Plus, the visual of Leatherface riding an electronic bronco just by itself is hysterical. It's all so hilarious and delightful even before getting into how the high-quality of this music video makes me feel justified in thinking there was creative possibilities to be found in mashing up country music with classic cinema. Maybe there's hope for my French New Wave-themed parody of That's The Only Way I Know after all?
Posted by Douglas Laman (NerdInTheBasement) at 1:57 PM

Email ThisBlogThis!Share to TwitterShare to FacebookShare to Pinterest
Labels: From The Interwebs, Garth Brooks, The Texas Chainsaw Massacre