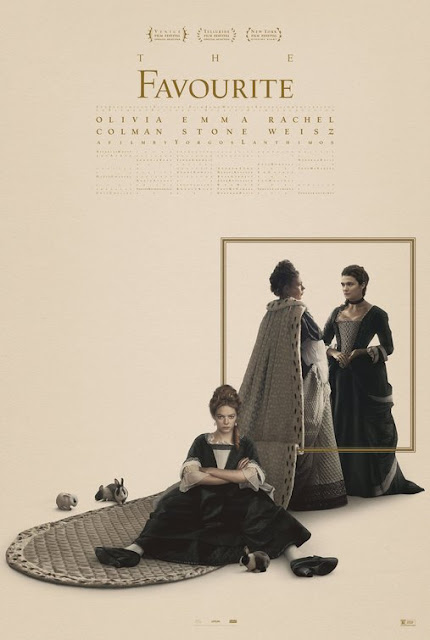 I am really starting to dig this trend of costume period piece movies like Phantom Thread, Colette and now The Favourite that have their period-era characters talk and act like modern warts-and-all human beings. Though they didn't pioneer this trend (why, the Comedy Central TV show Another Period has been doing this for quite some time now), it is a nice departure from the norm in cinema where the default mode of doing these films is to depict historical time periods in a sacrosanct manner that has people acting as proper as possible. That's not quite the approach taken by The Favourite, which has more in common with a Marx Brothers comedy or even, in terms of ribald dialogue, a period-era version of a raunchy Seth Rogen comedy than it does with your average Stephen Frears film.

Based on actual individuals who existed in late 17th century Britain, The Favourite see's Abigail Hill (Emma Stone) arriving to the estate of Anne (Olivia Coleman), the Great Queen of Britain, in the hopes of garnering some form of employment. Abigail once was a more prosperous member of British society but her father's gambling habits led her to be put at the bottom rung of the social hierarchy. Now desperate to take control of her destiny, she's determined to find a way to cozy up with the most powerful woman in the land, Anne, which does not sit well with Anne's right-hand woman, Sarah Churchill (Rachel Weisz), who is suspicious of anyone and everyone who crosses her path.

Everyone in The Favourite has got their own agenda for self-fulfillment going on underneath the surface, though the trio of leading ladies tend to have a genuinely empathetic root for this tendencies compared to the male characters (like Nicholas Hoult's Robert Harley) who are humorously obtuse caricatures that reflect modern-day male political figures who are just out for themselves and have no real reasoning for their selfish wide-impacting actions.  That may be the key detail that makes The Favourite stand out as a Yorgos Lanthimos directorial effort, these wacky outsized personalities still manage to reflect discernably real people and behavioral traits just as prior Lanthimos movies managed to echo reality through their own specific demented stories.

Though that hallmark of his films is alive and well here, The Favourite is a departure from prior Lanthimos movies in many ways, namely, it's the first time he's directed a script he did not also write. Deborah Davis and Tony McNamara are the ones who penned the screenplay and the heavy emphasis on rapid-fire dialogue exchanges that merge profanity with old-timey syntax beautifully certainly feels world's away from prior Lanthimos-penned scripts that tend to lean on more cold and restrained uses of dialogue. That approach worked like aces for The Lobster but the specific style of dialogue Davis and McNamara have concocted for The Favourite works similarly well for this story particularly in terms of how much fun it is to watch.

There's real artistry to how the script creates its creatively ribald period era dialogue, the clear craftsmanship in the writing allows it to have substance beyond the shock value of watching people in elaborate gowns drop F-bomb's frequently. Quotable lines of dialogue are as prominent in The Favourite as rain is in a thunderstorm and the cast just seems to be having a ball working with all this wonderful dialogue, especially Rachel Weisz who commands the screen and every viewer's attention with her steely gaze and taut delivery of lines that cut through characters with more precision than any sword in existence. Weisz wields so much authority in her performance just standing around, let alone when she's firing off a gun, it's utterly glorious to watch.

It's also a hoot to watch Emma Stone differ from many of the more restrained leading roles she's done throughout her career for something that allows her to have an impressively realized cunning viciousness. Stone is doing work that's truly unlike anything else she's done in her career that's exciting to watch both as a sign of her talents as a performer and as a great performance on its own merits. Somehow, there does manage to be a best performance among this cast of riches and that MVP is Olivia Coleman who plays her figure of royalty with thunderous anything-goes bombast, one never knows what command might just pop out of Anne's mouth next. It's a humorously over-the-top role that Coleman works wonders with and also does an excellent job imbuing with surprising amounts of effective pathos by the end of the story.

Also marking a departure from prior Lanthimos movies is that Robbie Ryan is doing the cinematography here rather than Thimios Bakatakis, the usual go-to cinematographer for Lanthimos. It's hard to mind this departure from the norm when Robbie Ryan does such exquisite work behind the camera that's chock full of bold choice ranging from the types of lenses used to how camera constantly follows characters around in a manner making it seem like the camera is as curious as the viewer about what kind of absurd comedy the three lead characters will get into next. The Favourite is filmed well, has great performances and brilliantly takes the traditional nature of a period piece costume drama and shakes it up so much you'd think that subgenre was a snowglobe!
Posted by Douglas Laman (NerdInTheBasement) at 12:26 PM