Could Goku, World War I Soldiers And Chainsaw-Wielding Nicolas Cage Be Crucial To The Future of Cinema? 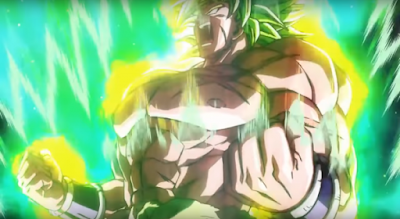 Prior to this week, I had no clue that the 20th Dragon Ball motion picture, Dragon Ball Super: Broly, even existed, let alone was making its domestic bow in movie theaters everywhere just yesterday, but that's just what happened when Dragon Ball Super: Broly bowed in 1,250 locations on January 16th,  2019. Though playing on one or two showtimes per theater, the feature managed to handily become the biggest movie in America on Wednesday with a massive $7 million opening day sum, enough to already make it the tenth highest-grossing Anime feature at the domestic box office. The movies domestic distributor, Funimation, will be keeping the title in theaters through this weekend with more frequent showtimes to accommodate just how popular the newest Goku adventure is.

The massive success of Dragon Ball Super: Broly makes it the newest example of a recent trend I've noticed in the past few months of certain movies managing to procure impressive box office figures from just a select few showtimes. Just last month, the Peter Jackson directed documentary They Shall Not Grow Old grossed $5.7 million from just two days of business that consisted of theaters showing it just twice a day. Meanwhile, one of 2018's best movies, Mandy, took everybody, including the people at RLJ Entertainment, its domestic distributor, by surprise by generating enough buzz from its one-off theatrical screenings in mid-September to ensure it was still playing in a handful of movie theaters in the first weekend of November.

The subsequent screenings, like the initial mid-September showings, were restricted to just late evening showings. In theory, that should have restricted Mandy's box office potential, but like They Shall Not Grow Old and Dragon Ball Super: Broly, it only seemed to entice moviegoers to check out this warped creation and it eventually increased its event appeal status. These three films managed to parlay positive buzz and a unique style of theatrical release to not just decent success by the metric of a limited release feature but just box office performers in general, particularly They Shall Not Grow Old and Dragon Ball Super: Broly. The likes of 2018 box office flops like Samson, Gringo, Action Point, God Bless The Broken Road and Life Itself all played in significantly more locations than They Shall Not Grow Old and Dragon Ball Super: Broly, not to mention had the benefit of all-day screenings, yet it's the pair of motion pictures with more scarce showtimes that managed to walk away with the bigger domestic grosses. The unorthodox release patterns that accompanied these sleeper hits may have been risky, but they paid off in dividends and showed that there was clearly an audience for fare that most major American movie studios never give the time of day.

For the rest of 2019, maybe this style of showtimes (which Fathom Events has been using for years on theatrical screenings of potentially niche material) should be trotted out more often? Speaking as someone who has at the very first of those theatrical Mandy screenings on September 13, 2018, it really is a ball to watch a special screening of a brand-new movie with a crowd of people, particularly when that movie is as excellent and an enthralling experience as Mandy! Plus, for the benefit of studios like Funimation, it allows studios to minimize their financial risks on releasing certain titles (the less showings you have to cover, the less money studios have to spend). Best of all, more studios giving theatrical releases (even more scarce ones in terms of showtimes) to off-kilter fare like Mandy or the newest Dragon Ball movie allows for a greater level of diversity in what you could potentially watch in your local movie theater. Movie theaters should be home to all kinds of cinema that appeals to all types of different audiences and tastes, including longtime Dragon Ball fans. It makes my heart sincerely happy to see Dragon Ball Super: Broly following in the footsteps of They Shall Not Grow Old and Mandy by using strong domestic box office numbers to make a case for the value of giving a wide range of types of cinema the chance to shine on the big screen.
Posted by Douglas Laman (NerdInTheBasement) at 9:23 PM