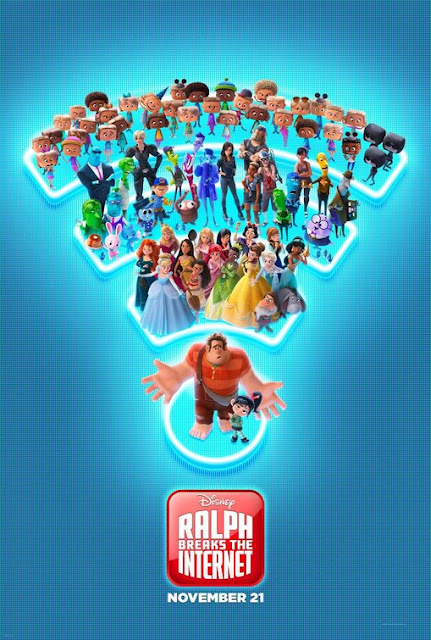 As Vanellope Von Schweetz (Sarah Silverman) notes early on in Ralph Breaks The Internet, the internet is a vast place. This sprawling domain is rife with possibilities for comedy and it's easy to imagine that writing up potential internet-based plot points or gags for Ralph Breaks The Internet would be an incredibly fun exercise. Unfortunately, the excess of potential in its central concept seems to have thrown Ralph Breaks The Internet off-kilter to a degree in terms of storytelling. Frequently, the films feels like a collection of stand-alone short films chronicling the exploits of the Wreck-It Ralph protagonists exploring the wide world of the internet rather than a cohesive feature-length movie.


The overall story of Ralph Breaks The Internet concerns best buddies Wreck-It Ralph (John C. Reilly) and Vanellope Von Schweetz having different reactions to constantly going about the same routine day-in and day-out. Ralph loves all the consistency of his arcade video game life but Vanellope feels disinterested in continuing to go about the same routine, a feeling that gets heightened when the steering wheel on her video game, Sugar Rush, gets busted and leads to her game getting shut down. She and Ralph decide to use the newly installed Wi-Fi server in the arcade to travel to the internet and find a new steering wheel for her game, a task that leads them to all sorts of different corners of the internet to earn up enough money to buy that steering wheel on eBay.

The more Ralph Breaks The Internet leans on just mining references to the very existence of certain elements of the internet for either laughs or poignancy, the weaker it is. A name-drop of Chewbacca Mom, a clumsy and obligatory scene involving internet comment sections, shots where the camera pans over locations belonging to Twitter and Google, that's where Ralph Breaks The Internet becomes the worst possible version of itself. There's no extra bit of substance to be found here in these moments or scenes, it's all just like that moment in Shark Tale where Will Smith's character, Oscar. begins to randomly spout famous movie catchphrases, it's just an animated family movie dredging up something discernably familiar at the expense of something original.

Luckily, there are some elements of Ralph Breaks The Internet dealing with cyberspace that, much like The LEGO Movie did with Batman, actually do twist the familiar into something imaginative that can stand on its own merits. These sequences focusing more on originality are where the movie tends to work best, as seen by how scenes set in a fictitious gruesome racing game called Slaughter Race tend to be much more inspired than scenes set at a Buzzfeed knock-off. Jokes about sharks popping out of random manholes in the Slaughter Race game, that's always humorous whether or not you know about the online racing games Slaughter Race is a pastiche of. Meanwhile, jokes about screaming goats (what is it with 2018 animated movies and screaming goats?) and going viral in the online realm, those just feel like pop culture references that were hackneyed back in 2014.

The correlation between originality and quality in Ralph Breaks The Internet can be best seen in its visuals, which tend to be impressive in their creativity even if one isn't an internet master. For instance, the visual personification of the world of the internet itself is astonishingly well-detailed and vibrantly colorful, it's a visual feast on its own while also having the cherry on top detail of these designs being clear homages to the visual appearances of future Earth seen in The Fifth Element or Blade Runner. Those are fitting visual touchstones since those two science-fiction movies, like Ralph Breaks The Internet, depict futuristic societies still plagued by mundane present-day problems.

Like the sets, the character designs in Ralph Breaks The Internet are also a treat to watch, particularly the designs for new characters J.P. Spamley (Bill Hader) and KnowsMore (voiced by Disney Animation good luck charm Alan Tudyk), the latter of which looks like he could have walked out of one of Disney's educational animated cartoons from the 1950s. Both Hader and Tudyk accompany the clever designs of their characters with delightful voice-over turns, two of numerous strong vocal performances in the film. The two standouts in the cast turn out to be Gal Gadot, who does a great job vanishing into her role as a skilled racer, and Sarah Silverman. It's no shocker that Silverman can execute a great humorous line delivery but it turns out she's more than well-equipped to handle the emotional parts of Vanellope's storyline as well.

Vanellope's discouragement with her predictable life and how it impacts her friendship with Ralph (who's becoming extremely clingy to Vanellope) is the strongest plot element of the frequently scattershot but also frequently amusing screenplay for Ralph Breaks The Internet and it leads to a climactic emotional scene that lands with surprising levels of maturity and effective poignancy. I had my doubts while watching it that there was gonna be anything more to Ralph Breaks The Internet than just an assemblage of broad internet-based jokes, but thankfully, the movie wraps up its story in a satisfying fashion that makes it clear there was more on directors Rich Moore and Phil Johnston's mind than just making name-dropping YouTube. Plus, the more episodic nature of Ralph Breaks The Internet has some benefits in addition to the aforementioned drawbacks, most notably in allowing for a sequence depicting Vanellope meeting the Disney Princesses that's thankfully hysterically funny rather than solely being a flashy example of corporate synergy.
Posted by Douglas Laman (NerdInTheBasement) at 11:56 AM