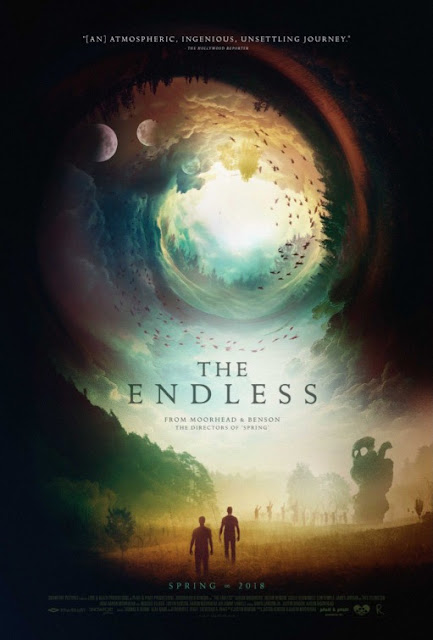 With director Justin Benson and Aaron Moorhead's The Endless, I finally got to experience what it's like to be a non-Marvel geek and watch a newly introduced superhero like Black Panther show up in a movie like Captain America: Civil War. The Endless also has characters from another motion picture, specifically, the lead characters from Benson and Moorhead's 2012 film Resolution show up in towards the end of The Endless. Despite not having seen Resolution, the two characters presence here, like Black Panther in Civil War, was totally organic, I never would have guessed they were from a separate movie altogether if the interwebs didn't inform me that they originated in Resolution.

The Endless is more than just references to previous Justin Benson and Aaron Moorhead directorial efforts, it's actually primarily the story of brothers Justin (Justin Benson) and Aaron Smith (Aaron Moorhead) trying to make a life for themselves years after they left a cult-like group called Camp Arcadia that adopted and raised them after the deaths of their parents. Justin is glad to be free of that place while Aaron hates their new life as well as how much Justin controls him and wistfully wishes to return to Camp Arcadia. After the two receive a videotape from the camp, they decide to take a brief trip to the place they grew up in, much to Aaron's delight.

While they spend some time here, it becomes clear that something screwy is going on at Camp Arcadia, but neither Justin nor the viewer is quite sure what it is. The best aspect of Justin Benson's screenplay is how he gets tension out of establishing a menacing presence at Camp Arcadia while keeping the source of that menace obscured. Some unusual sights, namely joggers that just seem to ignore the world around them, make it obvious how something is rotten in the state of Denmark here, but it's all played in a nebulous enough of a fashion to keep one on edge. Could the more realistic horrors that Justin keeps suggesting this camp is capable of be the explanation behind all the odd sightings or is something more extreme going on here?

Benson's script also does a fine job establishing the realistically realized dynamic between the two brothers, Justin's protective tendencies towards his brother and Aaron's nostalgic method of remembering the camp both come off as completely understandable. Though it eventually turns into a full-on thriller, The Endless builds up to that intensity with a number of interesting scenes showing how these siblings have difficulty communicating their disparate worldviews and desires to one another. Rooting the story in the universally relatable process of struggling to communicate with a sibling is a brilliant way to make sure The Endless is fixed into reality even when things get a little on the outlandish sight in the third act.

The third act is probably the weakest part of The Endless since it becomes too enamored with the complex mythos it's using to explain what exactly is going on at Camp Arcadia, though the occasionally convuluted nature of this section of the story is somewhat mitigated by how Benson ends up tying these heightened plot details into the central brotherly relationship as well as some creative chilling sequences that make great use of the horrors that have befallen those at and around Camp Arcadia. Meanwhile, the performances of Benson and Moorhead as these characters sometimes comes off as somewhat amateurish but for the most part, they do solid work in these roles and they especially work well as directors of The Endless, an ambitious thriller that works best when it concentrates on the dynamic between its two lead characters .
Posted by Douglas Laman (NerdInTheBasement) at 1:46 PM