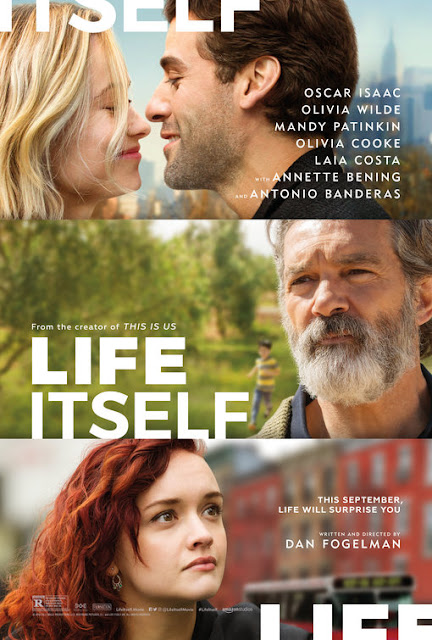 Perhaps you've heard of the movie Life Itself. Maybe you saw the advertising for its September 2018 theatrical release or maybe you've only been exposed to it via ads on the Amazon Prime section of the Amazon website or there's a good chance your only exposure to Life Itself has been by hearing a loved one trying to recount its labyrinthine plot. There are many ways to be exposed to Life Itself but merely hearing about it or seeing a poster for it is nothing compared to actually watching the movie. This is a tragic trainwreck of a feature film, one that sees a murderer's row of actors get put to use on a film whose thematic substance is about as thin as roadkill on a Texas highway.

Life Itself begins, like many classic films, with some Samuel L. Jackson voice-over work name-dropping Billy Eichner in an opening scene that concludes with Annette Bening getting hit by a bus before revealing that everything that's happened up to that point has been the work of forlorn screenwriter Will Dempsey (Oscar Isaac). Dempsey recounts to his therapist, Dr. Cait Morris (Annette Bening), the circumstances that led him to his current lowly state, which include him recounting the start of his long-term romance with college sweetheart Abby Dempsey (Olivia Wilde) and their plans to start a family. So begins a five-chapter saga that spans numerous lives, countless decades and finds shockingly little for its star-studded cast to do.

The subsequent stories eventually involve Will and Abby's jaded 21-year-old daughter, Dylan (Olivia Cooke) and the Gonzales family who work for the wealthy Vincent Saccione (Antonio Banderas) in Spain. The wide scope of the storytelling in Life Itself is meant to show the wide-ranging ripple effects (primarily negative effects but sometimes good ones too) that one person's life can have others. It's easy to see why writer/director Dan Fogelman would be enamored with this idea given how many transfixing pieces of art centered on this notion have been made in the past, but his execution of that particular concept in Life Itself leaves so much to be desired.

Most notably, this is the most predictable type of melodrama storytelling (a style of storytelling that can be richly entertaining when done well), Life Itself is overly preoccupied with the most generic kind of human anguish. There are so many characters in this movie, how come they all had to be such forgettable individuals going through such rote turmoil? If Life Itself had to be this bad, couldn't it have been like The Room where it's so bad it's funny because of its numerous bizarre creative decisions? Only a dismally executed meta-opening sequence and the choice to play a bus constantly coming out of nowhere to run people over as serious drama have any real creativity to them, the rest of the movie is just the most dismal and derivative kind of schmaltz masquerading as profound meditations on life told through an overly convoluted story structure that renders things nearly incomprehensible to parse out.

In terms of actual plot details though, Life Itself is disappointingly dull, every big plot development meant to shock the viewer has been to death on any given soap opera, the storylines feel like warmed-up leftovers rather than a disastrous but bold dish prepared by a cutting-edge chef. All of this flaccid storytelling (save for the aforementioned wacky opening scene) is told in a somber fashion that makes the proceedings grating to watch as well as reinforces elements that do not work well at in this specific tone. Will's extended early monologue about he refuses to ask Abby out because "I know there'll be nobody else after that" sounds like the kind of thing a serial killer would say to a lady he just kidnapped, but the self-serious nature of Life Itself  executes the line as if it's so profoundly romantic that it'll be this generation's "Love means never having to say you're sorry" in no time flat.

Clearly, Fogelman's script is an utter mess, a screenplay that can't find any good reason to either justify its expansive scope or make said scope entertaining to watch. His direction isn't much better as the actors, save for a surprisingly effective turn by Antonio Banderas, seem to be utterly lost in the middle of all of this madness, even the likes of Oscar Isaac and Annette Bening just go through the motions in their performances. The lifeless performances serve as a fine companion to the screenplay for Life Itself at least, both show a movie that's so obsessed with how human beings impact one another that it forgets to have an ounce of humanity of its own.
Posted by Douglas Laman (NerdInTheBasement) at 1:55 PM