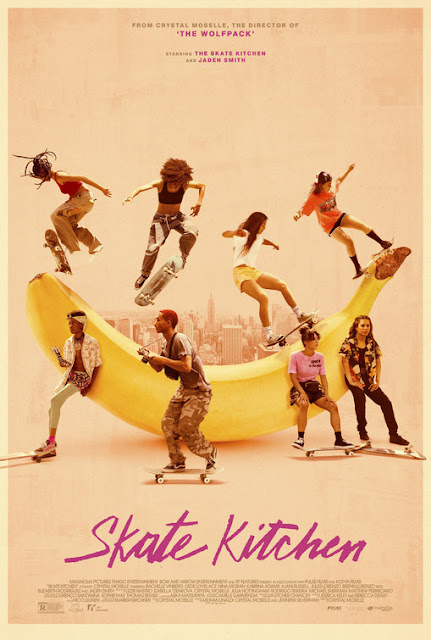 On the surface, Skate Kitchen's premise about a teenager struggling with their own personal family woes finding some kind of solace in a group of skateboarder friends sounds like a good number of other American indie movies, particularly Jonah Hill's 2018 directorial debut Mid90's. But on closer inspection even just on a surface level, there's a number of details here, namely the focus on a group of female skateboarders, that make Skate Kitchen a horse of a different color. While actually watching the movie, any potentially similar movies vanish from one's mind as Skate Kitchen manages to carve out its own identity and secure a level of quality (one that is higher than Mid90's in my book, for the record) that allow it to stand out on its own.

Before we break down how and why Skate Kitchen works so well, let's get more specific on what's going on here on a story level. Our troubled teenage protagonist is Camille (Rachelle Vinberg), a girl with a passion for skateboarding, little to no social life and a mother who's constantly keeping Camille from fully embracing her passions. Going against her mother's wishes, Camille begins hanging out with a group of female skateboarders that give Camille everything she's been wanting in her life, specifically an opportunity to revel in the art of skateboarding as well as a chance to be around people who support her.

The screenplay, penned by Crystal Moselle (who also directs this project), Jen Silverman and Aslihan Unaldi, does a wonderful job bringing to life the group of friends Camille ends up centering her life around. As individual characters, they're thoroughly entertaining to watch, particularly Kurt, an especially unfiltered and gusto member of the group portrayed by a riotous performance by Nina Moran. Moran's work as an actor certainly helps make Kurt stand out from the pack but each of Camille's skateboarding pals end up sticking out as individual characters, they're not just carbon copies of one another but rather vibrant human beings you could pick out in a crowd with ease.

This cluster of characters also functions as well as a menagerie that could believably entice Camille into their social circle with their more easygoing parents and frank conversations about adult situations & matters that Camille's own household forbids. Watching Camille gradually become more comfortable around this group of friends is already plenty engaging on its own, especially since the dialogue exchanges between the various characters both feels incredibly true to life and is frequently quite humorous. But then the script for Skate Kitchen throws out one of its best narrative curveballs by going in an unexpected direction for this type of a movie about a teenage outcast finally finding a group of friends they can connect with.

That narrative curveball gets tossed out when Camille begins to hang out Devon (Jaden Smith), the ex-lover of her new best friend Janay (Ardelia Lovelace) and his crew of skateboarders without telling Janay, Kurt or the rest of her initial group of skateboarding friends. Not only is this a clever turn for the plot to take as we head into the third act but it also flows organically from the perspective of the lead character's motivation. Camille has been yearning for human connection that allows her to be herself for so long, it makes total sense that she'd expand her social circle in this manner even though it jeopardizes all the friendships she made with her first group of skateboarder friends like Janay and Kurt. Camille's desperation to have as wide of a social circle as possible has blinded her to the feelings of the members of said social circle.

That's a great example of a character motivation that one can see as clearly selfish while also being something the viewer can't help but empathize with given how we've been privy to the circumstances that have made Camille so hungry for these skate park friendships. The scripts willingness to go in such an unexpected and complex direction with Camille is remarkable, just like Rachelle Vinberg's wonderful & similarly nuanced work in her lead performance as that very same character. Skate Kitchen constantly upended my expectations throughout its runtime with its sharply conceived script and performances. All this realistic coming-of-age tale was really missing was an appearance by the greatest skater of all-time, Tony Hawk????
Posted by Douglas Laman (NerdInTheBasement) at 3:16 PM