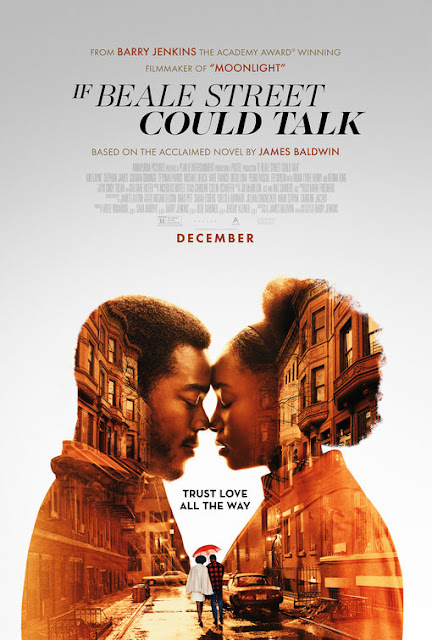 Tish Rivers (KiKi Layne) was only 19. Fonny Hunt was only 22. They were deeply in love in New York City in 1974 and are all set to start a life together, but then tragedy struck in the form of Fonny being arrested for a crime he did not commit. Shortly after he's arrested, Tish learns that she's pregnant with his child, a revelation that she shares with Fonny in one of the opening scenes of the new Barry Jenkins directorial effort If Beale Street Could Talk. From there, the rest of the story, which is based on a 1974 James Baldwin novel of the same name, chronicles Tish and her families attempts to try and free Fonny from his prison sentence as well as numerous flashbacks showing pivotal moments in Tish and Fonny's romance.

It's hard to know where to even begin with detailing how well If Beale Street Could Talk works. It's an intoxicating experience rich with vibrant emotions that stem from every aspect of the production. The score, the acting, the cinematography, the costumes, it all contributes to a mesmerizing achievement that truly captures the experience of being in love as well as the different ways we can be so thoroughly dedicated to other human beings.  The latter element is clearly seen in how Tish is relentlessly dedicated to freeing Fonny from his unjust prison sentence, but it also emerges in how much Tish's parents are also dedicated to this same cause as well as how devoted Fonny was to Tish before he was wrongly incarcerated.

As for how If Beale Street Could Talk depicts the romantic infatuation between the two leads, that's something that cinematographer James Laxton truly excels in. The camera is constantly perched in a manner that emphasizes the perspective of Tish, whether it's the camera pulling in on her in her perfume department job or if the camera is meant to explicitly convey her point-of-view when she's looking romantically at Fonny for the first time on the subway. There's a fascinating level of detail and purpose to the camera movements in If Beale Street Could Talk and this is especially true of whenever the camera is used to brilliantly capture Tish's headspace on a visual level, an accomplishment that allows our lead characters perspective to be fully clear to the viewer (some well-executed narration from Tish also helps achieves this).

Though Laxton excels with numerous pieces of intricate camerawork here, some of his best shots are just simple ones, like close-ups of characters facing the camera head-on. A visual hallmark of the 2016 Barry Jenkins film Moonlight is put to phenomenal use here as characters like Tish and Fonny just look onward into the camera, and by proxy the viewer, and communicate so much about their characters just through their facial features. Sometimes, pure joy radiates off the screen, other times, haunting anguish is captured, all through a single shot of a character looking into the camera. Sometimes, the simple things are all you need and Laxton has the good sense to rely on elegant simplicity in If Beale Street Could Talk addition to his more complex camerawork.

Those type of shots wouldn't work as well as they do if we didn't have actors here who could work well with such a restrained visual approach. Luckily, KiKi Layne and Stephen James are tremendously impressive with their ability to get a viewer choked up just through their facial expressions. Layne is especially outstanding in her very first feature film role, the way she subtly portrays Tish as a recognizably vulnerable human being but also one who has the tenacity to endure through immense hardship is a remarkable accomplishment while her line deliveries in the narration are impeccable. Meanwhile, James is equal parts charismatic and heartbreaking in his performance while the supporting cast is rich with noteworthy actors turning in strong work with Regina King as Tish's mother being the standout.

This impressive cast, working under the outstanding direction of Barry Jenkins, At the outset of this review, isn't the only part of this movie that's firing on all cylinders of course. I mentioned that If Beale Street Could Talk was one of those movies where everything comes together to create a top-notch whole and that can be clearly seen in any of the romantic flashback sequences with Tish and Fonny. Such scenes get a lot of mileage out of how lead performers KiKi Layne and Stephen James have terrific chemistry with one another but they also work so well because of the aforementioned camerawork as well as a moving score by Nicholas Britell. Britell's score is a truly mesmerizing piece of work that stirs the soul, his tunes channel the feeling of being in love so wonderfully and provide a passionate auditory accompaniment to the poignant flashback sequences they appear in.
Usually, Britell's exceptional work appears in just flashback sequences as a way to emphasize how glorious these points in time were for Tish and Fonny. Meanwhile, scenes set in 1974 have little to no musical accompaniment, the grim nature of the present has maybe some distant background music and that's it. Briell's beautiful work is reserved for appropriately moving moments of romantic infatuation, making said moments all the more beautiful. Another separate element that enhances the quality of the film as a whole is the costumes and production design, which both lean heavily on bright colors that make the movie a visual feast. Red pipes adorn the roof of Tish and Fonny's apartment while Fonny can be seen wearing a bright green shirt, even the subway station has its fair share of vibrant colors. I can honestly say If Beale Street Could Talk looks like no other 1960's period piece I've ever seen and the bold luscious color choices in the costumes and sets is a key reason why.

All of these visual and auditory elements are in the service of a script by Barry Jenkins that's just endlessly brilliant, particularly in how it's able to push horrors that befall appropriately off-camera (like the in-prison abuse of a character superbly portrayed by Brian Tyree Henry or the sexual assault of a supporting female character played by Emily Rios) while clearly conveying the torment they're going through. Jenkins is interested in the experiences of these characters, how did the horrors in their lives impact them, not in simply using them for on-screen exploitation. This is a brilliant subtly incorporated move that reinforces the core crux of If Beale Street Could Talk: this is a story that's fascinated in the humanity of people that society casts aside or erases entirely. Tish says in an early piece of narration that young black people of this era are constantly told they're trash by American society at large, but she and Fonny now share a romance that, even when they're separated by a possibly lengthy prison sentence, constantly reaffirms the humanity and value of both their own selves as well as their significant others.

In its own way, their love is a form of quiet rebellion against the societally ingrained prejudices of America and combining that fascinating concept with this cast, those vibrantly realized sets, the meticulously executed camerawork, the beautiful music and sublime directing of Barry Jenkins and it's no wonder If Beale Street Could Talk is as excellent as it is. This is a motion picture that thoroughly impressed me in every respect in addition to leaving me in a constant state of tears from the opening on-screen text penned by the brilliant James Baldwin himself all the way to those final emotional gut-punch sequences that close out the proceedings. I urge anyone reading this to go and watch this movie on a big screen so that you can soak in every masterful detail that goes into the immense emotional power of the newest Barry Jenkins directed triumph If Beale Street Could Talk.
Posted by Douglas Laman (NerdInTheBasement) at 1:01 PM