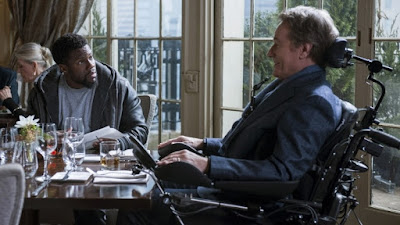 Well well well, looks like we have the first sleeper hit of 2019. The Upside soared above pre-release box office expectations for a $19.5 million opening weekend, the second-biggest opening weekend ever for STX Films and the tenth Kevin Hart vehicle to gross over $19 million on opening weekend. This is also the first movie not from one of the seven major American studios to top the domestic box office since Lee Daniels' The Butler in August 2013 (that feature hailed from The Weinstein Company). Also worth noting that the two of the three biggest opening weekends for comedies since Daddy's Home in November 2017 belong to Kevin Hart vehicles. Between this and Christmas 2018's solid performer Second Act, STX has had back-to-back hits with the kind of mid-budget inspirational comedies that the major studios don't make very much anymore. It'll be interesting to see if their future slate involves more films in this vein while I'm also curious if Lantern Entertainment (which acquired The Upside when they bought all of the Weinstein Company assets) is emboldened to become more of a major production company after this lucrative opening weekend.

Aquaman finally relinquished the top spot at the domestic box office, but it still managed to take in another $17.2 million, a 44% drop from last weekend for a $287.7 million domestic haul. That domestic gross is already plenty impressive but even more impressive is the fact that Aquaman became the first Warner Bros. title to cross $1 billion since The Hobbit: An Unexpected Journey in December 2012. What an outstanding result for this James Wan-directed motion picture that still has plenty of ground to cover at the worldwide box office.

Despite the fact that its trailer seemed to be on every single movie I've been to for the last two months, A Dog's Way Home grossed only $11.3 million this weekend, down about 38% from the $18.2 million opening weekend of A Dog's Purpose and subpar for the live-action dog movie subgenre. For comparison's sake, Underdog opened to $11.5 million back in August 2007. A Dog's Purpose was a major sleeper hit, especially in China, but not every live-action dog movie is going to be a guaranteed box office hit. A Dog's Way Home was held back by more generic marketing materials that echoed Homeward Bound and other dog movies too heavily while the abundance of family movies with more adult appeal also hurt it. Luckily, it cost only $17 million, so there shouldn't be too much money lost on this one.

For some reason, a lot of the holdovers this weekend had steep tumbles from last weekend. Maybe it's the blizzards keeping everybody indoors, maybe it's people getting back to normalcy after the holidays, maybe a lot of movies struggled to hold onto screens. Whatever the reason, the smaller weekend-to-weekend dips we've seen the last two weekends went out the window this frame as only two holdovers in the top ten had weekend-to-weekend drops under 40%. One of those two holdovers was Spider-Man: Into The Spider-Verse, which had the best weekend-to-weekend hold in the top ten with only a 31% dip. That dip allowed it to add $9 million to its great domestic gross of $147.7 million. Right behind it was fellow Sony/Columbia release Escape Room, which actually held way better than most early January horror films by going down only 51% from its opening weekend. For comparison's sake, Texas Chainsaw 3D dropped 75% in its second weekend back in January 2013. Escape Room grossed another $8.9 million this frame for a great 10-day haul of $32.4 million. Looks like that sequel Escape Room clumsily teased in its ending is totally happening.

Right outside the top five we have Mary Poppins Returns, which had a surprisingly harsh 54% drop this frame, giving it a fourth weekend gross of $7.2 million. That fourth-weekend haul brought it to a $150.6 million domestic gross,
Bumblebee fell much harder this frame than it has in the past two weeks as it dropped 48% to gross another $6.7 million for a $108.4 million domestic total. The head of Paramount's parent company, Viacom, explicitly dubbed Bumblebee as a successful and profitable venture for the studio ealrier this week so any additional box office it grosses from this point onward is pure gravy.

We had a lot of arthouse titles in the last four months of 2018 sputter out when trying to expand to wider audiences and a key reason for that was a lot of them weren't crowdpleaser fare that audiences turn out to. That's not meant as a critique of the quality of the films themselves, but something like Boy Erased was not going to be the type of feel-good movie moviegoers rush out to see. For an example of the kind of limited release fare that can have immense commercial potential, see On The Basis of Sex, which promised an inspirational drama in its advertising and audiences turned up for it to the tunes of $6.2 million for a solid per-theater average $3,238. Having already grossed $10.5 million domestically, this Mimi Leder directed motion picture is already a solid hit for Focus Features and Participant Media and given that next weekend is a 4-day holiday weekend and its A CinemaScore, it should hold nicely in the weekends ahead. Honesty, I wouldn't be surprised to see it eventually crack $30 million domestically.

The only other holdover to drop under 40% this weekend was The Mule, which dipped only 39% to gross another $5.5 million for a great $90.5 million domestic haul. A $100+ million domestic haul is assured for the newest Clint Eastwood directorial effort. Rounding out the top ten was Vice, which dropped 42% to gross another $3.2 million for a $35.9 million domestic gross, which makes it the eighteenth biggest movie ever at the domestic box office to center around either a fictional or non-fictional U.S. President. Fresh off a surprise Best Drama win at the Golden Globes, not to mention it getting a sing-along version in numerous markets, Bohemian Rhapsody increased 35% from last weekend for an eleventh weekend gross of $3.2 million, bringing it up to a massive $198.4 million domestic gross.

Entertaintment Studios, who have the best movie studio logo in history, released their first movie in nine months this weekend with the Keanu Reeves vehicle Replicas and it grossed only $2.5 million. That's the 28th worst opening weekend ever for a movie opening in over 2,000 locations and the second worst opening weekend ever for a wide release headlined by Keanu Reeves (only Feeling Minnesota, which was in about a third of the locations as Replicas, fared worse). This dismal bow isn't all that surprising given the minimal amount of marketing for the project but it certainly doesn't help Entertainment Studios, which has only had two hits (47 Meters Down and Hostiles) in its seventeen months of existence.

If Beale Street Could Talk finally expanded into wide release this weekend and only grossed $2.3 million from 1,018 locations for a per-theater average of $2,347 and a domestic gross to date of $7.6 million. Ralph Breaks the Internet fell 52% this frame, a much bigger eighth-weekend drop than other Disney Animation Thanksgiving blockbusters. Grossing another $2.2 million, this animated comedy has now grossed $190.4 million domestically. Can it get the extra $9.6 million it needs to cross $200 million domestically? The nation waits in rapt anticipation to find out. Also getting a boost this weekend from a Best Picture win at the Golden Globes was Green Book, which increased 16% from last weekend to gross another $2 million from 742 locations for a per-theater average of $2,827 and a domestic gross of $38.5 million. I'm puzzled why, nearly two months into its domestic run, Universal has kept this one's theater count so low, it's never played in 1,215 locations despite having great weekend-to-weekend holds. It's probably because they wanna give it major expansion timed to the Oscar nominations next week, but it still feels like this one should have been playing at a wider theater count in the past two months.

Second Act had a steep 65% plunge this weekend, giving it a fourth-weekend haul of $1.6 million for a $36.3 million domestic gross. A Star Is Born expanded back into 394 locations this weekend and grossed another $1.13 million for a per-theater average of $2,873 and a domestic gross of $203.5 million. Right behind that Bradley Cooper directorial effort was The Favourite, which fell 41% from last weekend to add $1.12 million to its domestic gross that now stands at $21.4 million. The Favourite is only the sixth limited release of 2018 to crack $20 million. Likely losing many of its screens to fellow Focus Features release On The Basis Of Sex this weekend, Mary Queen of Scots dropped 60% this weekend, grossing another $847,000 for a $15.2 million domestic gross. Continuing its slow but impressively steady box office run, Free Solo expanded into select IMAX locations this weekend and grossed $812,471 from only 154 locations for a per-theater average of $5,278 and a domestic gross to date of $13.2 million.

Suffering the worst weekend-to-weekend drop of any title playing at the domestic box office this weekend was Holmes and Watson, which fell 83% last weekend to gross another $555,000 for a dismal $30 million domestic haul. In its sixth weekend of release, Ben is Back expanded into 598 locations, an abrupt expansion that resulted in a middling haul this frame as it grossed just $467,500 from 598 locations for a per-theater average of only $782. Ben is Back has now grossed only $3.1 million domestically. Disappointing in its opening weekend this frame was Perfect Strangers, which grossed only $425,000, a sum behind the opening weekends of past Pantelion comedies. In its third weekend of release, Destroyer expanded into 27 locations and grossed $151,745 for a per-theater average of $5,620 and a current domestic gross of $426,264.

The top 12 movies this weekend grossed a total of $100.7 million, a weaker gross than usual for the second weekend of a year. Some of that can be attributed to wide release newcomers A Dog's Way Home and Replicas underperforming, though the current lack of major award season box office hits could be hurting things. This same weekend last year had titles like Darkest Hour, I, Tonya, The Shape of Water and Three Billboard Outside Ebbing, Missouri all grossing more of that frame than all the big award season players grossed this past weekend save for Bohemian Rhapsody (and even that Freddie Mercury biopic's $3.2 million sum falls short of what both I, Tonya and Darkest Hour pulled in on this weekend last year). January 2019 should pick up some steam next weekend when the long-awaited feature Glass arrives.
Posted by Douglas Laman (NerdInTheBasement) at 10:44 AM