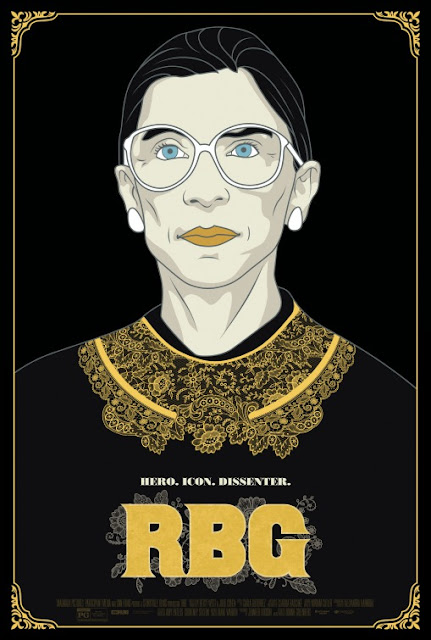 RBG is a biographical documentary about Ruth Bader Ginsburg and that's pretty much the short and simple of what it is. The feature, directed by Betsy West and Julie Cohen, isn't something that has any shocking revelations about Ginsburg or what fueled her political career, it's all focused on the basic events of her life that one can find in any biographical book. Such life events are presented in a relatively standard way for a political documentary, there's not too much here in the editing or choices of visual accompaniments that stands out as particularly creative or innovative. That being said, the film's ace up its sleeve is that the life of Ruth Bader Ginsburg is a truly inspiring one that you can't help but be invested in. The documentary about her may be run-of-the-mill in some respects but Ginsburg's real-life accomplishments certainly aren't.

Ginsburg started out her adult life as one of the first women to attend Harvard Law school, a place where, like her subsequent attempts to get employment as a lawyer in New York City, she found herself up against all kinds of societally ingrained obstacles designed to restrict just how far women could go in American society. But Ginsburg's a fighter and she constantly kept on pushing the boundaries of what she could accomplish. RBG depicts the life of Ginsburg and all that she managed to achieve intercut with scenes showing what Ginsburg is up to in the modern-day world which include being a symbol of hope and inspiration for many in the younger generation.

The inspirational nature of Ginsberg's story is what really carries the day here and it's quite impressive to see just how many barriers she's broken through in her lifetime. Assorted interviews with Ginsburg herself, as well as adjacent figures in her career, helpfully put some of her biggest accomplishments into a greater historical context. As said at the outset of this review, there's little in the way of revelations in regards to events from Ginsburg's past, but since the anecdotes tend to come from people who were involved in some capacity of the proceedings, even the most familiar events in Ginsburg's life are at least told in an interesting manner here.

Segments showing Ginsburg's influence in the present may be the most interesting part of the movie as we see, among other events, how an 85-year-old Supreme Court Justice has become the type of iconic aspirational figure typically only occupied by fictional superheroes. Fighting for equality is something that isn't accomplished in one fell swoop, it takes constant battles to push society in a more progressive direction and seeing how Ginsburg continues to inspire a whole new generation of trailblazers in American society. These modern portions of the documentary also show what Ginsburg is up to in her daily life and the sight of seeing such an iconic figure just doing morning exercise routines or talking to her younger relatives is fascinating, it's always a treat to see the mundane human side of figures of mythic stature.

That may be why Ginsburg is so inspirational to people all over the world, she's not someone with superpowers or other abnormal abilities, she's a normal individual who has used her intellect and patience to change the world. If she can provoke change in society, maybe the rest of us can too. RBG is a formulaic documentary in a number of ways for sure, which certainly makes it stand apart from a large number of far more bold documentaries released in 2018, but it's hard to become too frustrated formulaic when it's both competently realized and spreading a much-needed message of positivity & inspiration.
Posted by Douglas Laman (NerdInTheBasement) at 1:33 PM