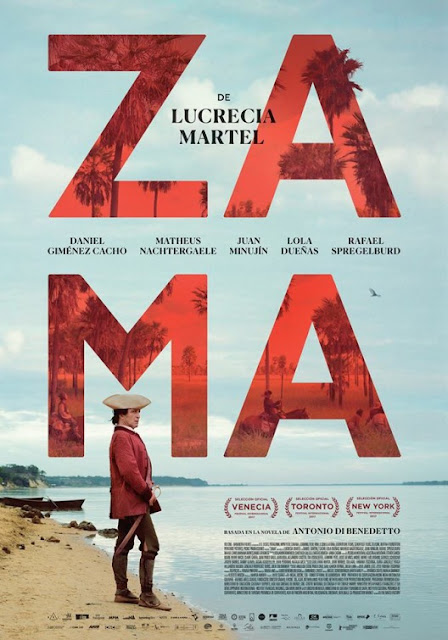 Lucrecia Martel has been a formative figure in the modern era of Argentinan cinema and her first feature film in a decade, Zama, handily continued her steady run of critically acclaimed motion pictures. For this new project of hers, Martel has decided to create a cinematic deconstruction of colonizer figures, the kind of people who are declared great explorers in the modern era for simply stumbling on an already inhabited terrain and slaughtering its inhabitants. Like stories that involve Nazi's getting beat up or stories revolving around pug puppies being happy & carefree, stories, like the one seen in Zama, about deconstructing such figures as flawed human beings is always welcome to see in cinema.


The figure getting deconstructed here is fictional individual Don Diego de Zama (Daniel Gimenez Cacho), a man who is frequently talked about in revered terms by local townspeople. His accomplishments may be legendary but Zama is now merely another man among many and frequently depicted as being more pathetic than someone ripped straight out of a fable. Bored and frustrated with his current status, Zama tries to work through the complex web of bureaucracy in the Spanish Empire to try and get some kind of mission worthy of his reputation, something he's willing to get at any cost, including spending the third act in a jungle locale trying to avoid the native population he and his companions dread so greatly.

Zama's struggles make for a movie that's, as said earlier, garnered widespread acclaim from both Argentinan critics as well as critics from around the world. I'm afraid I'm not as vocally positive about the film as the vast majority of people, though I did still admire and respect it, particularly in terms of how its story depicts the desperation of its lead character. Martel's script does a great job of showing just what pitiful lengths Zama will go to for self-fulfillment and part of its success comes from the bold move of shifting the story solely to a jungle-terrain for the final half-hour or so. Such a drastic shift in the environments allow for us to see how much Zama has become absorbed by his own desires, he's now taking a woebegotten trek into the wilderness that sees him having to constantly fight for his life every minute of every day just so he can secure the mere prospect of potential personal satisfaction.

Status is everything to Zama and this concept is beautifully highlighted by this intrepid location-based move on the part of the script as well as an excellent lead performance from Daniel Gimenez Cacho. Cacho works well in this role throughout the whole film but he especially seems to excel at portraying the later stage of Zama's desperation, there's a restrained sense of frenzied despair in his acting that makes the character immensely compelling. Meanwhile, the films visual components are an all-around glorious accomplishment from the costumes by Julio Suarez to the cinematography by Rui Pocas to the assorted sets that exceptionally capture numerous tiny details related to the stories time period.

Despite all the accomplished visual elements coupled with Martel's sterling direction and writing, Zama was still a movie I struggled to find myself getting engrossed by, though I was always impressed with its visual craftsmanship. In terms of why Zama ended up being something I overall respected rather than adored, I feel like it's more of a problem on my end rather than an inherent glaring issue with the film itself. These type of slower-paced movies can be hit-or-miss for me personally and I'll freely admit to not being all that riveted or intellectually intrigued by much of the films intentionally glacial nature. Even if it's pacing was a problem for me, there's still plenty to praise in Zama and a film this well-crafted deserves to be widely seen, especially since I could see it's unique style of storytelling working perfectly for other moviegoers.
Posted by Douglas Laman (NerdInTheBasement) at 1:26 PM