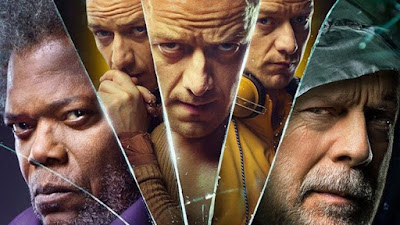 All box office figures discussed here are for the three-day weekend.

After nineteen years of waiting, the world finally got an Unbreakable sequel in the form of Glass. Combining the worlds of Unbreakable and Split into one film, the newest M. Night Shyamalan feature was generating massive amounts of pre-release hype that had many (myself included) thinking this one had the potential to overperform mightily. However, it turned out Glass fell slightly below pre-release expectations, grossing $40.58 million, up only $500,000 from the $40 million opening of Split two years ago despite the added presence of Bruce Willis and Samuel L. Jackson from Unbreakable.

For a $20 million budgeted thriller, this isn't a bad opening, especially since it's the fourth biggest January opening weekend ever, the fourth-biggest opening weekend for a Blumhouse release, the third-biggest ever release for an M. Night Shyamalan film and, believe it or not, the biggest opening weekend ever for a movie Bruce Willis appeared in (the previous victor for that title was, of all things, G.I. Joe: Retaliation). Taking a look at how the under-expectations bow for Glass still ranks as one of, if not the, highest openings for its creative participants suggests that this might have always been the ceiling for how high Glass could have gone, it would have taken super positive buzz from critics and audiences to get it much higher. We shall see if the film can manage to crack $100 million domestically given it's divisive reception and how frontloaded it was this weekend.

The Upside continued to surprise people with its strong domestic box office performance this weekend as it took in another $15.6 million, down just 23% from last weekend. Having grossed $43.9 million in ten days, it's already the fifth biggest movie ever for STX Films.

It's rare that I get to bust out unfiltered hyperbole in this weekly column. It's truly rare for films to just come out nowhere and be massive hits worthy of such praise but good God, Dragon Ball Super: Broly has done just that folks. This colossal sleeper hit has taken in $10.6 million in its first weekend of wide release from just 467 locations for a per-theater average of $22,821. This is the second-biggest opening weekend in history for a movie opening in limited release, only the IMAX opening weekend of Mission: Impossible- Ghost Protocol fared better. Grossing $21 million since it opened on Wednesday, this is the third-biggest Anime feature ever at the domestic box office and only the third Anime film ever to cross $20 million domestically. It's also the biggest Funimation title in history by a wide margin.

The Dragon Ball Z fandom is a massive force to be reckoned with and for the 20th Dragon Ball film, Funimation made sure to market it as an event movie. In the past, anime films that aren't the first two Pokemon features have been treated as a niche property but here, Dragon Ball Super: Broly has become the kind of box office smash hit that shows just how widespread the love for this series and this animation style is. This title has held on way better than expected on a day-to-day basis than expected, so the sky really is the limit for how big this one could go. Needless to say, Dragon Ball Super: Broly is one of the most impressive box office performers in recent memory and may just have completely altered everyone's perception of the kind of box office figures anime features can do at the domestic box office Well done Goku and company, well done.

A Dog's Way Home fell 36% this frame to gross $7.1 million in its second weekend of release for a 10-day domestic run of $21.2 million. Next up is yet another Sony/Columbia holdover, Escape Room, which had a solid 40% third-weekend drop to gross another $5.2 million for a $40.7 million domestic total. Looks like this one is well on its way to being one of the biggest early January horror films in history. Dipping only 31% this frame was Mary Poppins Returns, which took in another $5.2 million for a domestic total of $158.7 million while fellow Christmas 2018 family movie holdover Bumblebee dropped 35% this frame for a fifth-weekend gross of $4.6 million for a $115.9 million domestic total.

Rounding out the top ten was On The Basis of Sex, which had a solid 34% second-weekend drop this weekend as it took in another $3.9 million for a $16.8 million domestic total. Next up we have The Mule, which fell 38% for a sixth-weekend gross of $3.5 million and a current domestic total of $96.9 million. Award season juggernaut Green Book (it just won the Producer's Guild of America award for Best Picture last night) had its second straight weekend-to-weekend increase this frame as it jumped up 5% for another $2.2 million, bringing it up to a $42 million domestic total. Bohemian Rhapsody became the thirteenth 2018 movie to crack $200 million at the domestic box office by grossing another $2.2 million, a 29% drop from last weekend for a massive $201.9 million domestic cume. In an attempt to get it past $200 million domestically, Disney boosted Ralph Breaks The Internet's theater count to 1,936 locations, resulting in it grossing $2.1 million (a 4% dip from last weekend) for a domestic total of $193.2 million.

Vice dropped another 52% this frame four a fourth-weekend gross of $1.5 million for a $38.8 million domestic total. That's a far from ideal domestic gross for a $60 million budgeted project, but it is enough to make it the fifteenth biggest movie in history about a fictional or non-fictional U.S. President. In its second weekend of wide release, If Beale Street Could Talk fell 36% to gross another $1.6 million for a current domestic total of $10.4 million. Meanwhile, The Favourite dipped 26% this frame to add $810,000 to a domestic gross that now stands at $22.7 million while A Star Is Born dropped 43% to gross another $639,000, bringing its domestic haul up to a gargantuan $204.6 million.

Remember Replicas? It opened in over 2,300 locations last weekend! After a dismal opening weekend, Replicas fell a massive 81% this frame, making it only the 12th wide release movie in history to fall 80% in its second-weekend. Grossing only $350,000 this frame, Replicas has now grossed a disastrous $3.8 million domestically. Stan & Ollie has now been playing in limited release for four weekends now and has been doing steady decent, but not spectacular, business in that timeframe. It grossed another $391,455 this frame from 84 locations for a per-theater-average of $4,660, actually a tad higher than the per-theater average of The Lady In The Van (a fellow Sony Pictures Classics title that Stan & Ollie is basing its release on) when it was playing in 82 locations. Stan & Ollie has now grossed $788,835 domestically and expands to theaters everywhere on Friday.
Cold War made its biggest expansion yet, this time to 39 locations as it grossed $293,000 for a per-theater average of $7,518 and a domestic total to date of $747,833. This one's performed quite well over its four-week run and, if it can score a Best Foreign Language Film nod at the Oscar nominations announcement on Tuesday, it should continue its domestic run nicely. Finally, Destroyer struggled in its expansion to 50 locations as it grossed only $150,747 for a per-theater average of $3,015 and a domestic gross to date of $636,831.

The top 12 movies this weekend grossed $116.5 million, up 5% from this same weekend last year when Jumanji: Welcome to the Jungle was still atop the box office and the ninth biggest haul for a third-weekend of any given year in history.
Posted by Douglas Laman (NerdInTheBasement) at 10:52 AM