Dogtooth Is Weird, Warped And Well-Made. In Other Words, It's A Yorgos Lanthimos Movie. 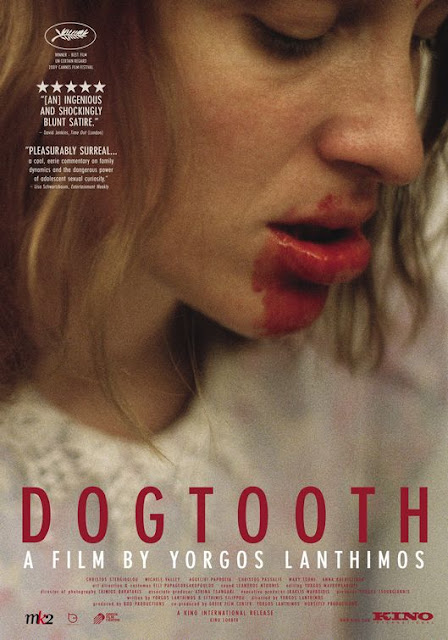 Though he had directed two feature-length motion pictures before it, Dogtooth was the movie that really put Greek director Yorgos Lanthimos on the map thanks to its widespread acclaim and a nomination for Best Foreign Language Film at the Academy Awards. The same kind of rampant dark humor, understated line deliveries and grim tone that permeates the man's later directorial efforts like The Lobster and The Killing of a Sacred Deer are around in Dogtooth in abundance. In fact, Dogtooth feels very much like a precursor to The Killing of a Sacred Deer, not just in how it focuses on a family unit but also in how it feels like Lanthimos constantly dancing on the razor's edge of just how far he can push his actors and viewers with all the warped scenarios he puts them through.


No one gets names in Dogtooth and why would they? This is a science experiment of sorts done in a clinical manner meant to avoid emotional attachments despite the fact that it involves a whole family consisting of Father (Christos Stergioglou), the man behind this whole experiment, Mother (Michelle Valley), and their three adult kids (portrayed by Angeliki Papoulia, Mary Tsoni and Christos Passalis). The kids are the centerpiece of this experiment as they've spent their whole lives isolated from the rest of the world, allowing the parents to totally warp how they view the rest of the world as well as what certain words mean.

Naturally, their offspring are constantly curious about what's out there beyond their compound and the Father trying to keep his kids constantly in his control provides the crux of the conflict in Dogtooth. Like the two other aforementioned Lanthimos directorial efforts, Dogtooth uses an extremely over-the-top scenario as an allegory for mundane human experiences. This go-around, Lanthimos is fascinated by how parents suffocating individuality in their children through willfully imparting ignorant perspectives on the world can only lead to tragedy, as seen by the grim conclusion that sees one of the daughter's ignorance of how the real world operates crush her desperate pursuit for freedom.

That subtext mostly takes a backseat during the course of the movie to Lanthimos exploring what kind of madness this family lives with on a daily basis as the Father does everything in his power to keep reality at bay. Some examples of the dark humor that emerge from this scenario work better than others, though thankfully there's no real massive comedic duds to be found here and the best pieces of dark humor work exceptionally well. A scene like the one where the Father teaches his family members how to bark like a dog benefit greatly from how comitted writer/director Yorgos Lanthimos and the cast are to this premise. 110% of their energy is showing up on the screen and all that effort means these sequences end up being so jaw-droppingly bizarre that they end up inspiring laughter if only because it feels like there's no other way to properly respond to what's occuring on-screen.

Similarly memorable humorous is the sight of the kid's rigid dance moves, which makes the dancing of the Peanuts kids in A Charlie Brown Christmas look like the work of Mikhail Baryshnikov, is similarly highly amusing. This moment of great physical comedy is a perfect demonstration of the wonderful work put in by the trio of actors portraying the kids in this warped definition of a family. Their work is especially impressive considering the difficult roles they have to play here. Papoulia, Tsoni and Passalis have to portray people who are overtly subdued & mechanical in their behavior while still managing to convey their recurring desire to maybe possibly have a life of their own. All three of them do superbly detailed and frequently humorous work with these imposingly complex roles.

Meanwhile, their characters father becomes such a menacing force of nature thanks to the performance of Christos Stergioglou, who, in keeping with how these Lanthimos movies can capture reality through such stylized means, echoes real-world abusive fathers nicely in his portrayal of a Dad who sees his three "children" as just inanimate tools. While Yorgos Lanthimos clearly has a fixation on absurd disturbing scenarios, the rich performances in Dogtooth show that his directing clearly has a similar level of fascination for the people tasked with carrying out these aforementioned scenarios. Paying such great attention to both of these aspects as a director means Yorgos Lanthimos finds immensely satisfying performances and monumentally demented storytelling.
Posted by Douglas Laman (NerdInTheBasement) at 10:46 AM